When you’re booking an international award flight, one of the trickiest things to figure out is how to get from where you are going to and from international gateways. Although there is more point-to-point service nowadays, the majority of international flights travel between major hub cities with connecting flights on either end.

Alaska Airlines has a somewhat unusual and often frustrating rule when it comes to partner award tickets (these are tickets that involve flights on airlines other than Alaska Airlines). You can only mix a single partner and Alaska Airlines flights, which has historically made positioning really difficult on Alaska Airlines Mileage Plan award flights.

The upside of this approach is that it allows Alaska Airlines Mileage Plan to run separate award charts per partner, which (presumably) allows Alaska to price award flights in a way that reasonably correlates with their cost. So, rather than having a single chart for all partners that averages the cost across all programs, they can have a separate chart for each partner. Overall, I think this makes sense because some partners (such as Emirates) appear to be very expensive for the program while others (such as Condor and Icelandair) are relatively inexpensive.

If Dusseldorf is your destination, it’s surprisingly difficult to get there with Mileage Plan.

The downside of this approach is that, in order to reach partner gateways, you’re limited to the reach of Alaska Airlines within North America (which used to be a serious drawback) and you’re also limited to the reach of the partner you’re flying. So, for example, if you are flying American Airlines to London, you can’t continue onward to the rest of Europe with British Airways. Additionally, in some cases, Alaska Airlines only has partnership agreements with a primary airline, and not all regional affiliates:

However, just to make things more confusing, there are other cases where it is possible to fly regional affiliates. You can use American Eagle flights on an American Airlines partner award, and you can also use Openskies flights on a British Airways award.

This means that when you’re booking an Alaska Airlines Mileage Plan award, it’s important to know which airlines fly to your destination, and what other ways you might possibly get there. For example, if you’re traveling to Dusseldorf, you won’t get there on Condor; they only fly to Frankfurt and that is the end of the line as far as Alaska Airlines Mileage Plan is concerned. You could do it on British Airways, connecting through London, but you must fly the entire route (except for connecting to and from the British Airways North American gateway city, which can be done on Alaska flights) on British Airways. However, when you consider the fact that British Airways charges more miles, the fact that British Airways also levies a fuel surcharge, and the pain of connecting through London, you’re probably better off flying to Frankfurt and taking the train from there to Dusseldorf.

Another thing that gets really confusing is which Alaska Airlines flights you can take in order to position for a partner award. Let’s walk through an example to see how it works. Suppose you want to travel from Seattle to London in business class this summer. There is a flight that seems perfect from North America to London:

The problem is, when you try to start from Seattle, this flight doesn’t show up no matter what you do: 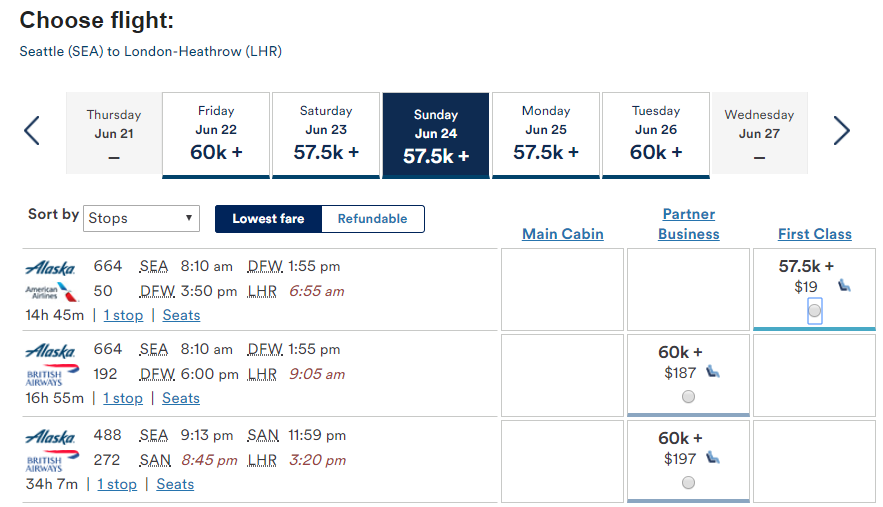 The other flights are all mixed cabin itineraries, and the economy class segment is the long flight (by the way, Alaska, you really should fix this). So obviously you wouldn’t want to book these.

Frustratingly, though, there’s an Alaska Airlines flight from Seattle to JFK! It should work, and you should be able to add this, right?

There is actually a specific reason why you can’t book this. It’s because you can only add an Alaska Airlines positioning flight if it’s available at the low “saver” level. And to find those flights, the best way to search them isn’t to look on Alaska Airlines’ Web site. Instead, you should search on the American Airlines Web site, which only shows Alaska flights in fare classes that can be hooked up to a partner flight. This surfaces a heretofore hidden option: 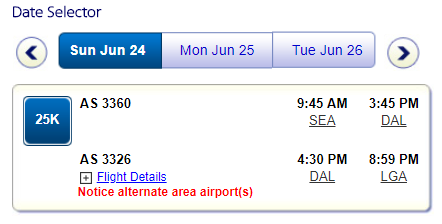 The perfectly timed overnight flight that would give you a full day in New York isn’t available for partner awards, so you can’t use it. However, by using the American Airlines Web site, another option surfaced.

Because this flight goes into a different New York area airport, and because of the overnight layover, this route didn’t show up on the Alaska Airlines Web site (although the Alaska site, to its credit, is considerably better at piecing together unconventional itineraries than most). So, to make this price out, we have to build it as a multi-city itinerary:

You can force a routing by putting in the specific airports you want. It’s hard to see here, but I specified LGA on the inbound flight to New York, and JFK on the outbound. That caused it to price out:

So, what’s really cool about this? Before the Virgin America merger, this is not a routing that would have worked. You’d have been stuck buying a flight to New York, or booking two separate awards. However, this routing makes use of Alaska’s newly expanded network to build in positioning flights.

It this an ideal itinerary? No. There is a fuel surcharge, British Airways has a below average business class, and there is a forced overnight in New York. However, you are flying in first and business class all the way to London, and have a full day to enjoy New York along the way. While not the best option, it’s certainly not a bad option for summer travel to Europe.

The next time you’re searching for an award flight with Alaska Airlines Mileage Plan, don’t forget that you can add Alaska Airlines flights to your itinerary at no extra charge–if you can find partner availability. That’s the hard part, but with some creativity and a bit of luck, you can stretch your miles even farther!