I just bought my first Delta “basic economy” fare! It was $108.20 from Seattle to Phoenix on Thanksgiving. I’ll get to my mom’s place in time for Thanksgiving dinner, and it’ll be really nice to enjoy the sun. I would normally avoid fares like these, but in this specific case it was the best option for me. Hey, this is Seat 31B–I put my money where my mouth is! 🙂

What is “basic economy?” Over the past 18 months or so, the major airlines have rolled out a new tier of economy class service. This was ostensibly intended to compete with ultra low cost carriers such as Spirit, but ultimately these fares showed up on pretty much every route.

The specifics of these fares vary by airline but the common features are as follows:

Given the complex rules, online travel agents have pretty much thrown up their hands. They do everything possible to discourage people from buying these fares. Here’s an example from Expedia: 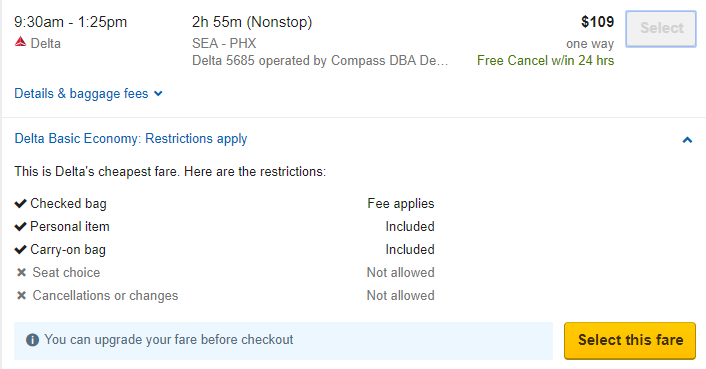 Expedia all but says “you don’t want to buy this fare.”

Airlines also do what they can to talk you out of buying their own basic economy fares. Here’s the warning you get from Delta: 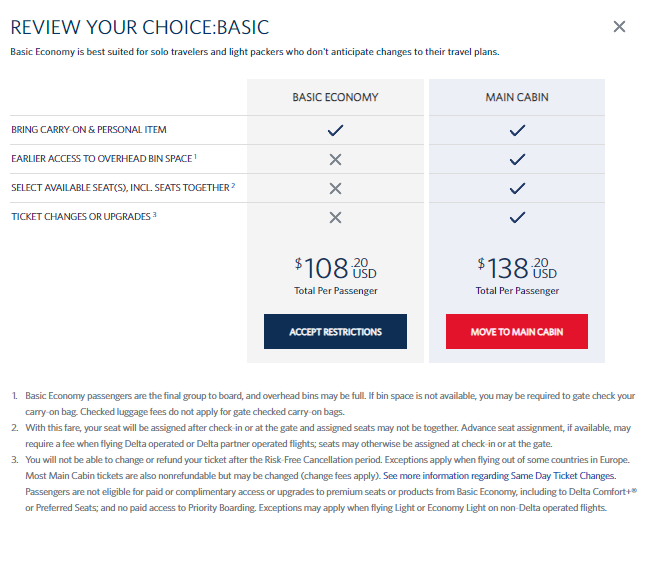 “Just pay around 30% more and you avoid all of these problems” Delta’s site practically whispers in your ear. I mean, I’m used to it. Gas stations try to upsell you to a higher grade of gasoline than you need, trying to guilt trip you into paying more. McDonald’s tries to upsell you super sized meals. So why not airlines, too?

After all, the agenda of these fares was pretty clear from the beginning: advertise a deceptively low fare, and then lard it up with fees resulting in a more expensive fare. This is the business model of ultra low cost carriers such as Spirit in the US and Ryanair in Europe. Unfortunately major airlines found that there were logistical problems in the implementation. For example, Ryanair has historically been set up so that nobody gets a free cabin bag (they experimented with allowing these, but have backed off the policy and as of November will charge for them again). Major US airlines give most people a free cabin bag, but United and American charge people traveling on basic economy fares for their carry-on. Similarly, seat selection is free with most fares on major US carriers, but isn’t free with basic economy.

Most people expect a terrible, scammy experience with Ryanair, but not with major US carriers.

This has all rolled downhill to gate agents, who are stuck enforcing policies that are confusing to the flying public, most of whom are not frequent travelers. The outcome is predictable: abandoned bags in airports causing security nightmares (Paris Charles de Gaulle airport alone had to call bomb disposal units over 1,000 times in 2017), parents being separated from their kids, and flight delays. That’s actually a really bad thing in the airline business–flight delays are really expensive.

Given all of this, you might wonder why I’m crazy enough to buy a Delta basic economy fare. The answer is simple: I’m saving $30, and for this specific flight, I’m actually not giving up anything of value. I’ll break it down so you can see why this was the logical choice.

For this flight, I had three practical options. I’ll break these down below.

The first option: 12,500 Alaska Airlines Mileage Plan or American AAdvantage points for a connecting itinerary from Seattle to Phoenix via Sacramento. This was attractive because I didn’t have to spend any cash (apart from the taxes), and it was a way to burn American Airlines AAdvantage miles (which are hard to use). Also, AAdvantage allows changing dates and routings as long as the origin and destination cities don’t change; this would give me the option to move to a different date and/or a nonstop flight if inventory opened up. The downside? The flight left at 5:50 in the morning, and the trip took almost 6 hours. Also, for holiday travel, I considered the chances of a more favorable nonstop routing to be slim.

The first option was easy to rule out. Why pay more points for a terrible flight? Choosing between the second and third options, on the other hand, wasn’t as obvious. Delta award tickets are treated more like regular economy class fares than as basic economy class. Still, it’s important to look at the practical differences between the fare types. I’ll break those down:

When I looked at the full picture, it made the most sense to spend cash this time. What tipped the balance for me? The Delta gift certificate I have has been surprisingly hard to use, and this is a good opportunity to spend it. It’s also cheaper than redeeming miles. I personally agree with The Points Guy’s valuation for Delta miles (although I usually get better value for them), so spending $120 worth of miles (plus $5.60) on a $108 ticket simply doesn’t pencil out.

And there you have it: I bought my first Delta Basic Economy ticket, and it actually made more sense to pay cash than points this time. More importantly, I’ll get to spend Thanksgiving in Arizona, which will make my mom happy!