I was pretty sure my flight was at 1:15 in the afternoon. Sure enough that, from memory, I arranged with the front desk to take me to the airport at the appropriate time to make an afternoon flight. However, I’d asked for breakfast to be served early — around 6:00AM, since I missed dinner and knew I’d be up early due to jet lag.

At 3:00am, I woke up with the nagging feeling that something was wrong. I hadn’t actually checked my flight time, and I was operating from my fuzzy memory based on an entirely incorrect time zone. So I pulled out the paperwork and sure enough, my flight was at 9:00am. It *arrived* at 1:15 in the afternoon. It’s a good thing that I was planning to be up early. I set an alarm for 5:30AM and was in the lobby by 6:00AM. 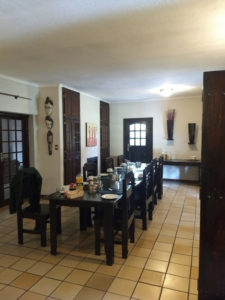 The Outlook Lodge not only got me an early shuttle to the airport, but even made breakfast for me early.

Now, the general manager of the Outlook Lodge at OR Tambo International Airport is probably one of the best hotel general managers I’ve ever met. When I let him know there was a problem, there was absolutely no scolding me. He just immediately sprang into action and solved the problem, asking a driver to come in early to get me to the airport on time. And since I had asked for breakfast early, he even made sure that I had something to eat beforehand. I paid $26 per night for this hotel and I don’t think I have gotten better value anywhere else in the world, ever.

The driver dropped me off at the airport and I went to check in for my flight. The check-in agent could have worked for any US airline, being officious about weighing my bag and making me pointlessly move items around between the bags (the 3kg was going on the plane anyway, so there was absolutely no sense in this). This was also my first introduction to how many hoops that St. Helena authorities make the airline jump through. First, there was a thorough visa check. St. Helena’s visa policy is apparently now the same as the United Kingdom (it used to be more lax) but in the airline’s visa information database, they actually reference the visa policy of Ascension Island (a St. Helena possession) which only allows US and UK passport holders visa-free. But in any event, I had a US passport, so the check-in agent finally relented on the visa issue. None was actually required. The next hurdle involved travel insurance. I didn’t see anywhere that this was required, but it is. Fortunately I have a policy that offers global coverage and I had printed it out (assuming I’d possibly need it for South African authorities).

Clearly frustrated in her inability to trip me up, the check-in agent printed out my boarding passes and handed them to me. Looking directly at me, she said “Gate A30, boarding time 8:15.” I thought this was early for a 9:00am flight, but knew that the aircraft was a regional jet so thought it was possible that it would be at a remote stand which would explain the early boarding time. Taking note of the time, I saw that I had time to visit a lounge so I headed to the surprisingly excellent Shangololo Lounge. It’s brand new, very nicely decorated, had a selection of typical South African breakfast dishes along with a coffee machine (which is what I wanted), and was available to visit with my Priority Pass. While I chafe at paying $450 a year for my Chase Sapphire Reserve, I really do get a lot of mileage out of the Priority Pass and often end up eating in lounges for “free” when I would otherwise grab a snack in the airport. 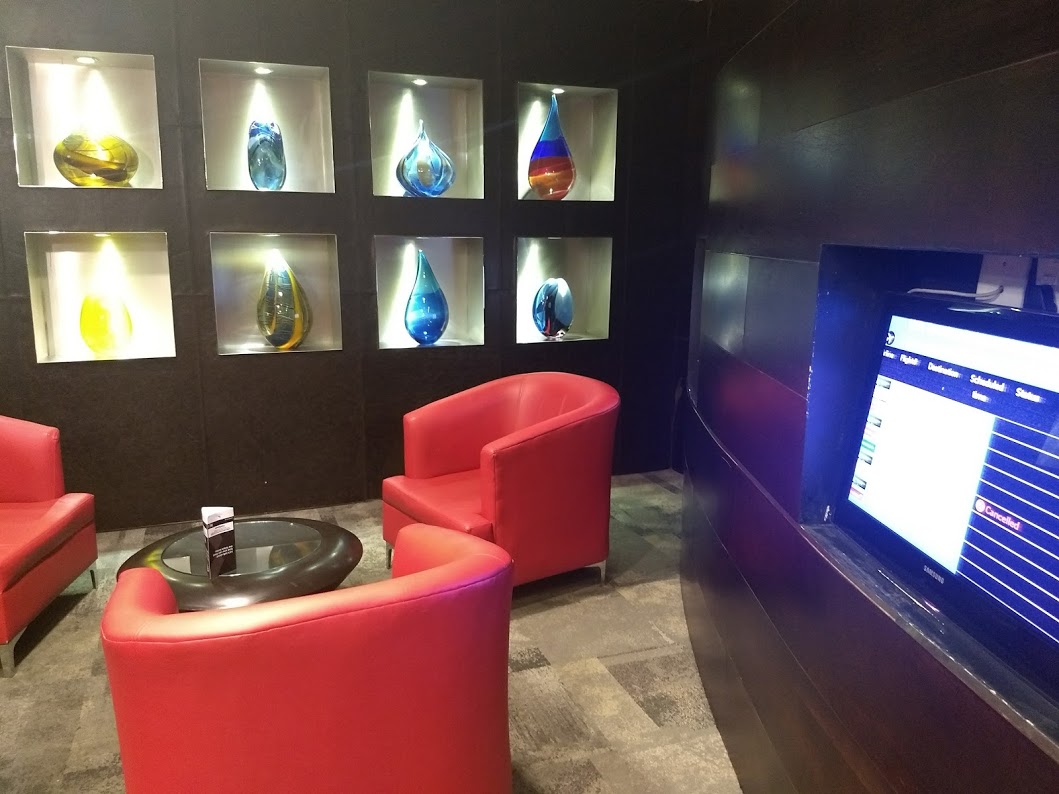 The Shangololo Lounge has a smart, modern, and distinctively African design. 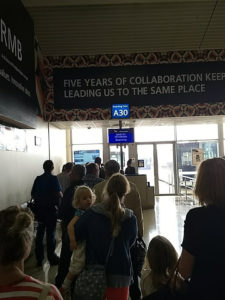 Don’t miss the bus for your Airlink flight! Get to the gate early.

At 8:10, I left the lounge and headed to my gate. I was right – the gate was a bus gate, and the aircraft was at a remote stand. Airlink had begun boarding at 8:15am sharp, and they were checking passports and travel insurance policies again at the gate. Obviously, there must be a massive fine involved for transporting people without proper insurance. After checking my documents once again, I was scanned through. I boarded the bus, and we waited and waited and waited and waited. Eventually the agent came on board looking for two people. They weren’t there. We waited a couple of minutes, and eventually a very frustrated gate agent boarded. There were two people missing, but they’d checked luggage, and now their bags would have to be offloaded. The gate agent wanted the flight out on time, and that wasn’t going to happen. She openly hated working the flight and all of its attendant hassles, especially the superfluous documentation checks.

My bag, as expected, was gate checked. There was no way it would fit in the overhead bin (despite meeting the published bag dimensions) which is why I’d offered to check it at the counter. Obviously the airline wouldn’t do that, because it would actually have made sense. The gate agent, to her credit, pulled me aside to gate check my bag before I carried it up the stairs–she knew it wouldn’t fit. Finally, I was on board. My economy class seat was surprisingly comfortable for a regional jet, and given that it was the appropriate width and nicely padded, it was actually more comfortable than many 737s.

We ended up waiting awhile longer – apparently as soon as the bus pulled away, the two late passengers showed up, looking appropriately sheepish and clearly fresh from a tongue-lashing. The annoyed gate agent apparently decided that shuttling them over to the flight would be faster than offloading their bags and doing all the paperwork so good news for them, they managed to make the one flight of the week. Bad news for us, though, we’d lost our take-off slot so the pilot announced we were on a short ground hold. However, this time, “short” actually meant that. We were making our way to the runway almost as soon as he finished the announcement. A few hours later, after being served a chicken salad sandwich for breakfast, we were landing in Windhoek, Namibia.

This flight is very unusual because it requires a technical stop in Windhoek, Namibia for fuel. Aircraft are required to have enough fuel to divert to another airport in the event the destination airport is unavailable. St. Helena can’t accept aircraft larger than an Embraer E75, and even these can have trouble landing due to the extreme cross-wind weather conditions at the airport. The aircraft that Airlink uses has enough range to safely divert if necessary, but only at slightly above 70% passenger load (meaning they can only sell 70 seats per flight) and only if the tanks are topped off in Namibia so there’s enough fuel to divert to either Ascension Island or Walvis Bay. What’s more, there aren’t any aircraft mechanics living on St. Helena (with only one flight a week, no locals have yet taken up the profession), so the airline has to bring a mechanic along on the flight. It started to become clear why the flight cost nearly $1,200 roundtrip: this was an extremely expensive flight for the airline to operate. 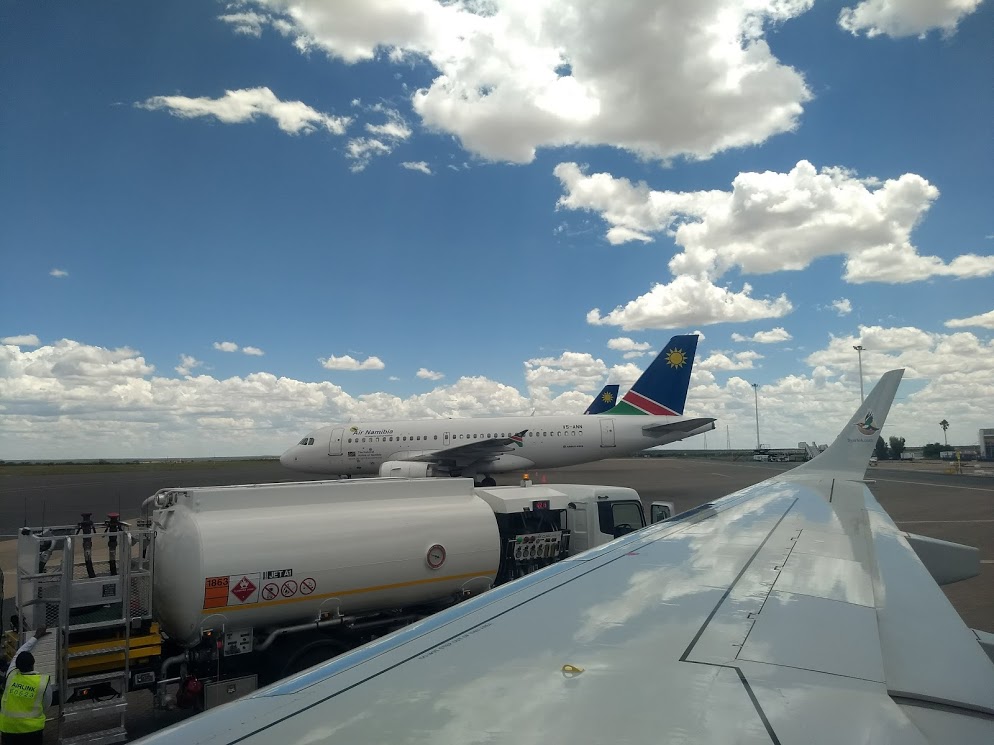 Tanks full to the brim during a technical stop in Windhoek. Enough fuel is needed to return to Walvis Bay. Air Namibia aircraft in the background.

Back up in the air, the flight crew came through again and served lunch. Yes, two full meals plus four beverage services on a 6 hour economy class flight! I chatted with the crew for a moment and learned that they do a turn at St. Helena and fly all the way back to Johannesburg the same day. It’s a 15 hour day. While this isn’t a longer work day than, say, a New York to Hong Kong flight, it’s arguably a lot more work getting two flights and three (and scheduled to be four) segments out the door. The crew gets one day for rest, and then they’re back to work the following day. 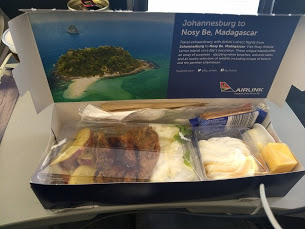 Second meal on Airlink flight. This was more substantial than the sandwich served earlier.

We began our descent a few hours later. I had moved from my original seat to an empty window seat in the row across from me, and was delighted to have a first view of the island. My first thought was “how in the hell are we going to land on that?!” The island is the top of an undersea volcano, with craggy jagged peaks and sheer cliffs dramatically rising out of the ocean. But then we were looping around the island, turning around in the other direction, and with a more rapid descent than usual we had a very firm touchdown. Some of the folks seemed jarred by the firm landing, but I’d expected it. Crosswind conditions are nothing to mess with; pilots want to get the flight on the ground as quickly and safely as possible with comfort a secondary consideration (firm landings can also be safe landings–the pilot didn’t necessarily mess up if you really feel it).

The St. Helena authorities have clearly been extensively trained and they’re doing everything by the book. The immigration agent asked me a lot of questions about where I was staying that were difficult to answer because I didn’t have a formal reservation from a booking agency, but rather had just arranged private accommodations through the tourist office. I eventually dug up the name of the person I’d worked with at the tourist office and the immigration agent was satisfied I wouldn’t be homeless. I also told the immigration agent I was leaving on the next flight, and she stamped me in until … the next flight. That’s it! Technically I could have stayed for 6 months with no visa, but why give someone even a day longer than needed? They might extend their trip and spend more money! Something I was happier to see was proper and extensive attention paid to biological quarantine procedures. St. Helena has one of the last populations of bees that hasn’t been subject to colony collapse and biosecurity is extremely important on the island. After Customs scanned my bags and found them free of guns or whatever they were looking for, I was officially cleared and was on the island.

Overall, this flight is in a way very usual (be prepared for all of the regular airline hassles) and also very unusual (extensive documentation requirements, multiple meal services and a technical stop). I found it surprisingly comfortable for a regional jet and it felt safely and professionally operated. While it’s disappointing that I couldn’t book the flight with miles and had to pay cash, it’s understandable that it’s so expensive. Even given the very high airfare, the government of St. Helena still subsidizes the flight. Despite operating only once a week, the flight is a massive improvement versus the previous boat, which operated just once every 3 weeks, and took 5 days from Cape Town.