In case you’re wondering why I haven’t posted much lately, I am currently on a trip in The Netherlands and Italy with my parents. I just graduated with my MBA, and am enjoying a last couple of weeks of freedom before I settle down into my new job (which I know is going to keep me very busy).

On our trip, we planned to visit Venice, Lucca, Florence and Rome. I mostly booked accommodations through airbnb which ended up being a lot cheaper than staying in a hotel, and promises to get us better locations and the convenience of being able to cook at home if we prefer.

Getting to Italy on the train is possible from The Netherlands, but it’s surprisingly expensive and takes a long time. My parents are also not experienced travelers; they consider a trip 3 hours north to Vancouver from their Seattle-area home to be an exotic foreign vacation. Flying seemed to be a better solution, but there wasn’t actually any way to fly directly from Amsterdam to Venice on conventional airlines.

I plugged my route into SkyScanner which is my favorite tool for checking flight prices and routes within Europe. It is particularly useful because it picks up a lot of budget airlines and routes which aren’t bookable through conventional online sales channels (such as Expedia or Orbitz) and won’t show up on the ITA Software search tool. This uncovered a nonstop route on an airline called Transavia which was surprisingly inexpensive–under $100!

Transavia is a subsidiary of Dutch airline KLM, which itself is a subsidiary of Air France. They fly primarily to leisure destinations throughout Europe from Amsterdam and Rotterdam. For the most part, they sell tickets on their own Web site (transavia.com) and flights do not earn miles with any frequent flier program. Transavia operates more or less separately from KLM, although they do share gates and some ground staff at Schiphol airport in Amsterdam (and maybe other places, I only noticed this in Amsterdam). Transavia also uses the KLM Web site for online check-in. We used it and it worked fine.

The similarities more or less end there. However, Transavia is not Ryanair; I consider the service a notch above both Ryanair and Spirit. They offer assigned seating (free 24 hours in advance, or earlier for an extra charge). The hand baggage allowance is just one bag, which needs to be pretty small. You can’t additionally carry a purse or backpack; everything has to fit in your carry-on bag or you have to check it. Checked bag fees are reasonable, at 25 euro for a 23 kilogram (50 pound) allowance and cheaper fees for lighter weights (as low as 15 euro for 15 kilo).

All fares are actually 5 euro more than advertised, because there is an unavoidable “booking fee” charged. Incidentally, I really wish that the EU would follow the lead of the US and require an “all-in” fare to be published, rather than phony fares that can never actually be booked.

At Amsterdam Schiphol airport, our Transavia flight used a regular KLM gate. The check-in counter was run by Transavia staff (a very friendly woman from Suriname who was highly efficient), but KLM staff assisted us at the gate. Things worked pretty much like boarding a KLM flight and a jetway was even used (budget airlines usually try to avoid doing this because it is more expensive). 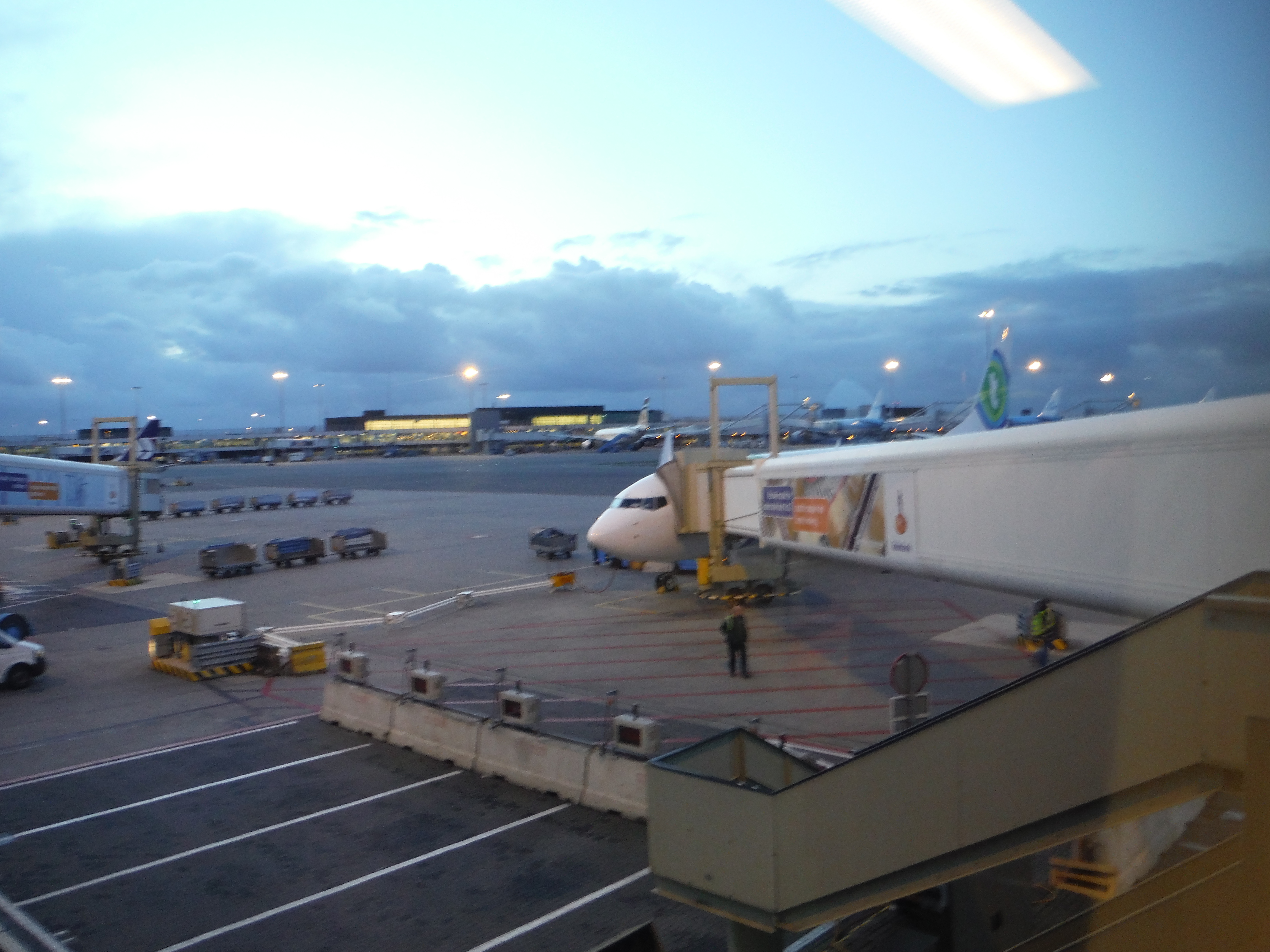 Transavia plane awaits at the end of the jetway 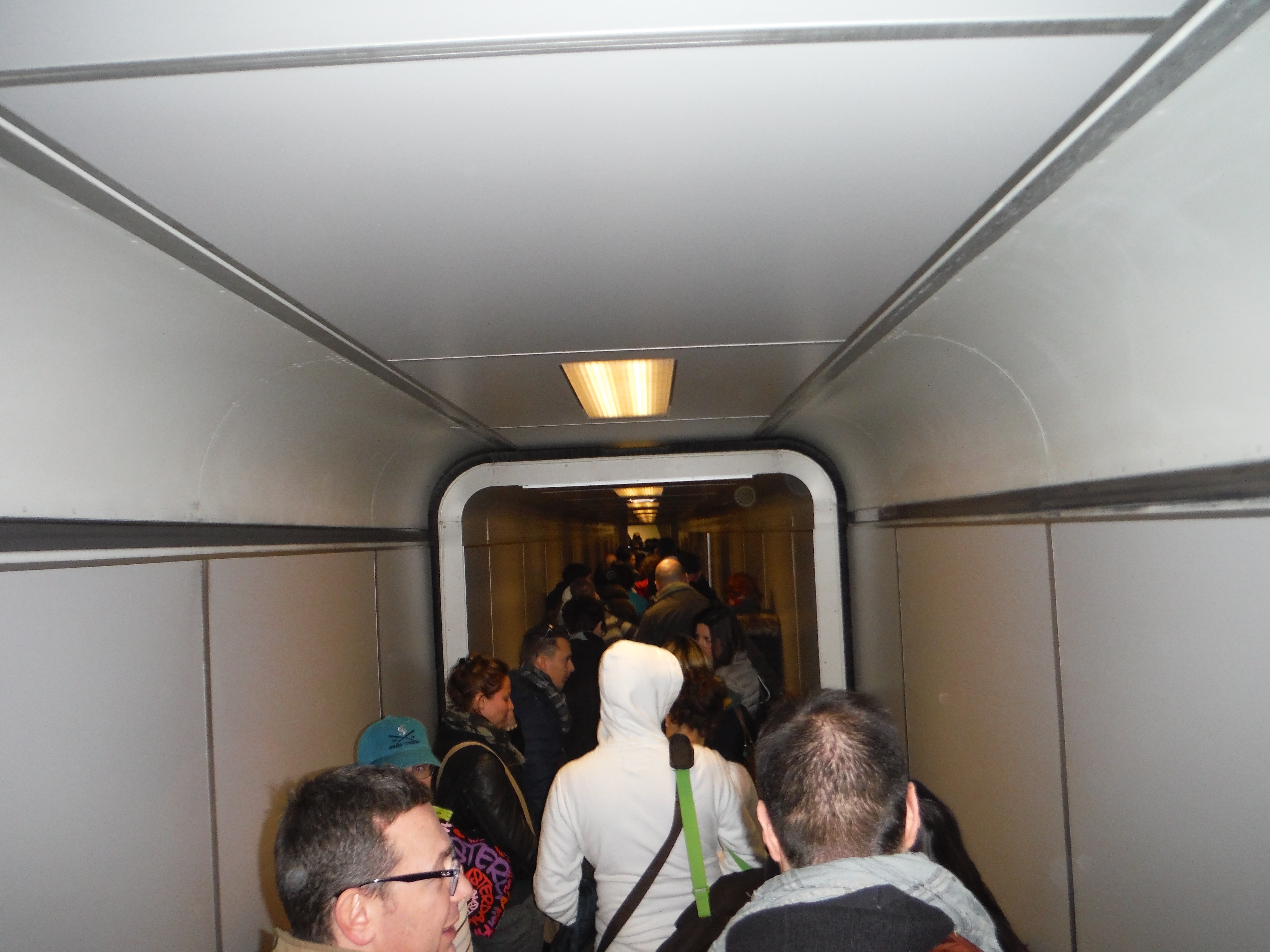 Transavia jetway – it was crowded!

Onboard, leg room wasn’t bad, and I had a whole row of seats to myself–until a really fat guy who required a seat belt extension helped himself to two of empty seats in my row. This wasn’t quite what I’d planned when I paid extra for a seat where the adjoining two seats were blocked, but it was only a 2 hour flight and I wasn’t going to make a big stink over it.

My very own row… for about 5 minutes.

My parents prefer to show up at the airport several hours early for their flight, and to be at the boarding gate early–preferably before the check-in staff arrive. I suggested we have dinner instead, bearing in mind that Schiphol is efficient. They went along with my suggestion with a mix of reluctance and trepidation. We ultimately arrived at the gate around 10 minutes before Transavia started boarding, which is normally plenty of time. Unfortunately,”gate lice” rushed the gate and we ended up somewhere in the middle of the group to board. There was only one boarding call. So much for pre-boarding, for which we had paid extra along with our supposedly premium seats.

Despite the meager carry-on bag allowance, the overhead bins were completely full so my father had to store his bag in row 29 despite being seated in 1A (I got up later in the flight and moved it underneath the seat in front of me). Lesson learned? Don’t pay for pre-boarding or a premium seat on Transavia. You won’t actually get either.

My seat did recline, there was inflight entertainment (consisting mostly of a bizarre video showing the flight kitchen where Transavia sandwiches are made–not appetizing!) and there was food service available. Everything cost money, even water, there was no hot food, and the only thing that was substantial was sandwiches. This is basically what things are like in Holland anyway so it’s not a huge surprise. The inflight staff wasn’t aggressive in selling stuff and the plane wasn’t festooned with ads like a bus, so it seems that KLM is trying to maintain some semblance of dignity with their Transavia product. 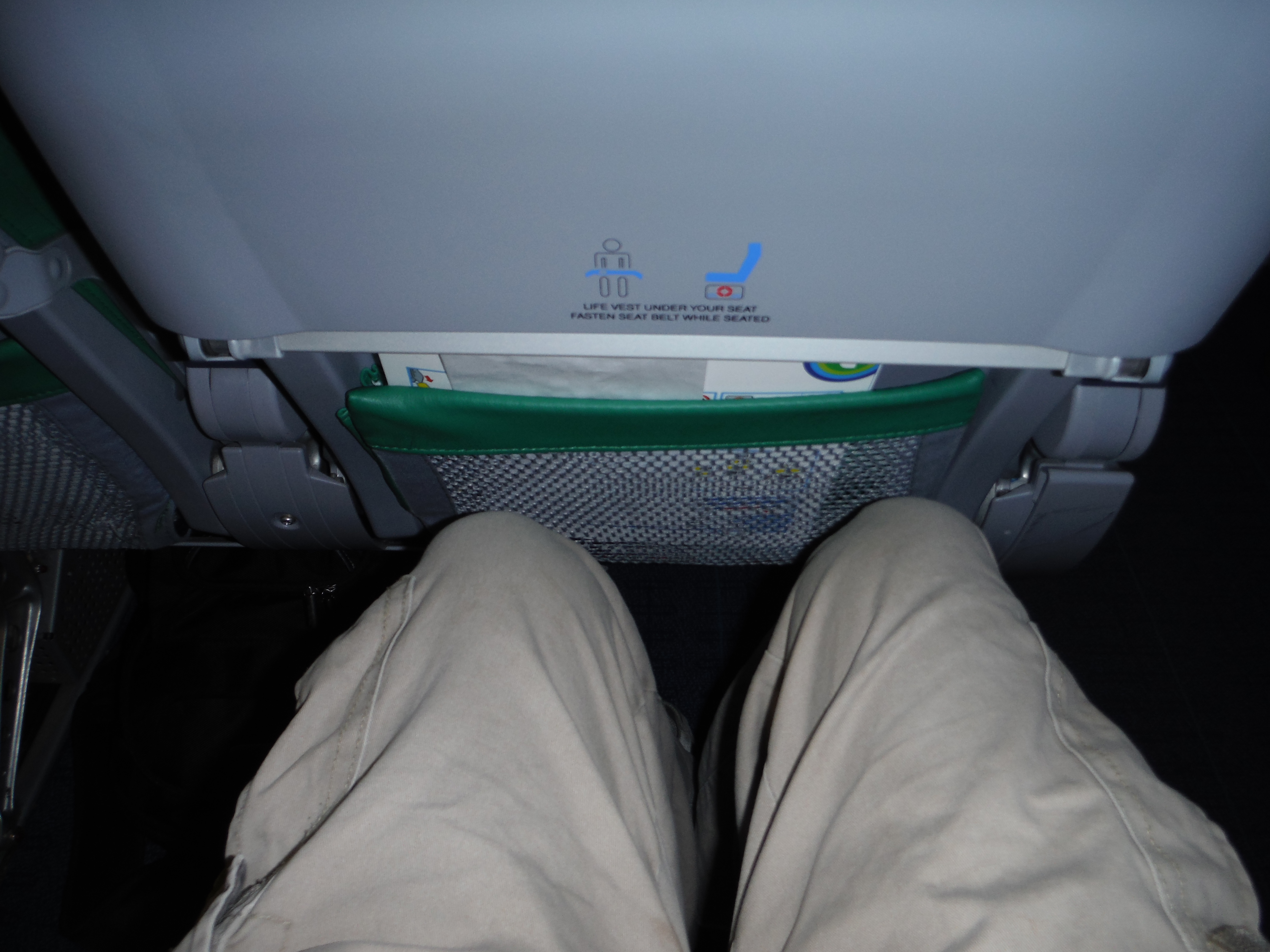 Transavia legroom is about the same as United

Arrival in Venice was at a bus gate, which was relatively quick. Two buses were parked near the exits and Transavia opens two aircraft doors (at the front and rear) for arrival. Luggage service was very fast, no problems with the bags, and we were on our way in almost no time.

Would I fly with Transavia again? Sure, if the price is right. Add 30 euro to the fare you see to get the “real price” with the same domestic baggage allowance you’d have with a US airline, and with their “booking fee.” Skip the extras, they may not be honored anyway and you can pick any available seat you want during online check-in. Also subtract the value of the frequent flier miles you’d otherwise receive by flying a legacy airline. If the deal is less expensive (and it was both more convenient and less expensive in our case), go ahead and book! Our flight was professionally operated, arrived on time, and was certainly comfortable enough for a short (2 hour) journey. Most importantly, it passed the “Mom test!” 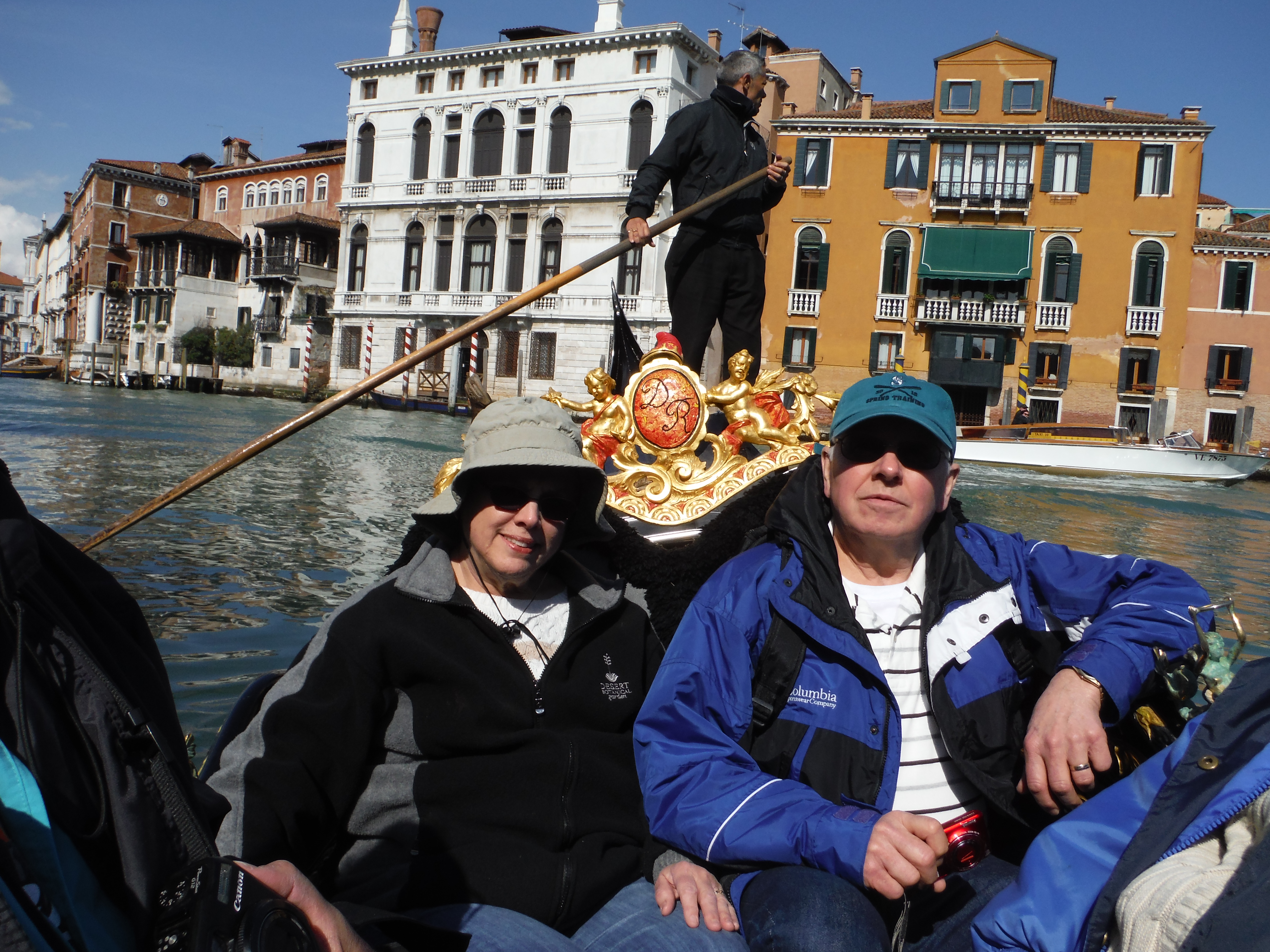