In September, I’m flying to Denmark on Air France in their spectacular A380, the world’s largest passenger airplane. I will spend my birthday in Europe, and it only cost me $555 roundtrip! Best of all, I will earn miles. Why Denmark, and how did I manage to find such a crazy low fare? A healthy dose of old-fashioned competition. 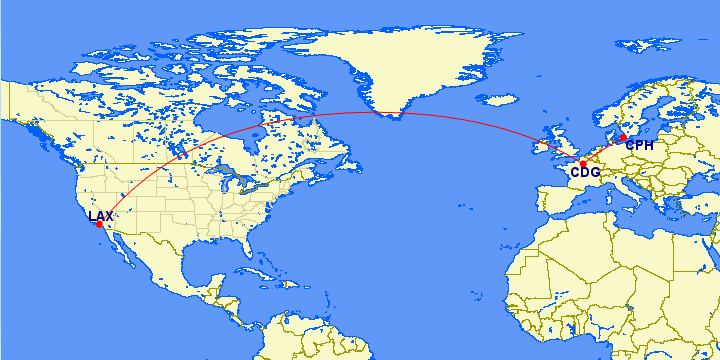 The new kid on the block in transatlantic service is Norwegian Air Shuttle, who has roared into the US with a new Boeing 787 fleet and some exceptionally low fares to Scandanavia. As you may have heard, intra-Europe flights are fairly cheap. The expensive part is getting to Europe from the US. Norwegian is–incredibly–offering round-trip fares of under $500 for fall travel in some markets. This is something that obviously has traditional carriers worried. Nothing really justifies fares to Europe being as high as they are, but there has been limited competition and virtually no competition from low-cost carriers. With the arrival of Norwegian into the US, this has obviously changed.

Delta, Air France, KLM, United and Air Canada have vigorously responded, publishing low fares to match–and in some cases even undercut–Norwegian in markets where they compete. Some airlines, such as Air Canada, give only limited frequent flier credit for such low fares. However, Delta allows any fare purchased on delta.com and carrying a Delta flight number to accrue mileage in their SkyMiles program. While SkyMiles is not my favorite program because Delta miles are extremely difficult to redeem, $555 would be a great fall fare to Europe anyway–even without mileage credit. Even though my flights will entirely be operated by Air France, they carry a Delta fare code (V) and flight number, and they were booked directly with Delta, so they will earn mileage. The fare I booked is not eligible for Alaska Airlines Mileage Plan credit. Check your flight numbers carefully and ensure they are eligible for credit to alternative programs.

I am an avid follower of The Flight Deal, a site that tracks and posts exceptionally low fares. They published a heads-up on Twitter, and I was able to find availability from Los Angeles on the ITA Software Web site. While the flights I found were coded under a Delta flight number (and I purchased them on the Delta Web site), they are entirely operated by Air France. I tried a few tricks to play with the routing in an effort to earn more miles (with particular focus on routing through Seattle so I could earn the double miles bonus), but none worked. I was only able to book the most direct routing without stopovers. This was, for what it’s worth, entirely OK with me. While extra miles are nice, it’s also nice to take a very direct routing and arrive refreshed.

The miles earned from this trip will, under the 2015 Delta program, buy a one-way “saver” award ticket–or put you halfway to a free ticket within North America. I value Delta miles at 1 cent per mile, which makes the fare effectively $429 when you subtract the value of the miles earned for an effective transportation cost of 3.4 cents per mile. It’s hard to find a deal that good anywhere!

This deal is still available on select dates to airports throughout Scandanavia. Availability is limited, but you should find a deal you’ll like if you are flexible with your dates.