I like getting bonus miles to share a good deal with friends, and I don’t like fine print. Chase is offering some of both in their most recent refer-a-friend promo for the Rapid Rewards Visa that you may have signed up for when I offered it in November. Beware: you might not get the miles you expect for signing up your friends if Chase also offers you a referral bonus.

I received an offer in the mail last week offering me 5,000 miles for every person that I refer through June 30th. However, there is a lot of disturbing fine print so I called Chase today to confirm the details of the offer. What I found out was really disturbing and Chase may not honor the referral deal as clearly published. So, if you choose to participate in this program, it’s best to be fully aware of how it might bite you.

Chase can change the terms of the promotion at any time. So, although I received a refer-a-friend offer in the mail for up to 10 friends–and they even included 10 tear-off referral cards to share–my promotion was silently cut back! What did Chase do? They pared back the promotion to only allowing 6 referrals instead of 10, and this was done with no prior notification. I would never have known unless I called Chase and they told me that they did this. I would have done the work of selling 4 friends and readers on their card (which, to be clear, is actually a good deal) for no compensation whatsoever.

Calendar Year Can Clobber Your Points

Making matters worse, Chase only awards 50,000 referral points per calendar year. I completed 10 referrals in November and December. However, the points haven’t been credited to my account yet, and won’t be credited until sometime in 2016. Chase measures “calendar year” based on when they credit the points to your account, not based on when the referral was completed. So, if I participate in any referral programs in 2016 at all, I’ll be helping Chase sell credit cards, but I won’t actually get the referral bonus for doing so. If I hadn’t asked, I would have done a lot of work for nothing.

Most travel bloggers won’t ever call out a bank for doing something wrong or questionable. After all, Chase pays good money for referrals, which is why most travel blogs are always going on and on about the Sapphire Preferred card (which, to be honest, just isn’t all that good). I’m not afraid to call out Chase, though–they’ve never paid me a dime. The refer-a-friend program is rife with exclusions and “gotcha” clauses and there’s simply no excuse for it. If Chase takes the referral, they should cough up the miles without any weaseling. After all, referring friends and readers doesn’t stop with them signing up for the card. It’s a lot of work! People come to me about any problems they have with the card, or any questions they have about the Rapid Rewards program in general.

I still think that the Rapid Rewards Visa offer with 50,000 bonus points is a good deal (vs. their normal 25,000 bonus point offer, which isn’t good). However, the refer-a-friend program just isn’t credible. It’s just too rife with conditions, exclusions, and last-minute changes. If you’re going to participate, I recommend you call Chase every time to confirm the details before you make a referral. And given the amount of time this requires, you might prefer to avoid the program altogether.

UPDATE: It’s back! Get this deal before it vanishes.

I don’t normally share credit card offers because every other travel blog is awash with them, and very few of them are actually good. However, I will occasionally share a deal that I genuinely believe is actually a good one. How can you keep me honest? I’ll tell you a secret: timing. The best time to get an airline affiliate credit card is near the end of a fiscal quarter, and near the end of the fiscal year is best. All the banks are trying to hit their numbers so they offer better deals. That’s why we’re seeing an exceptionally good deal from Chase on their Southwest Airlines Rapid Rewards credit card. This offer expires November 15, 2016.

What’s the deal? An exceptionally generous 50,000 Rapid Rewards points after an easily achievable $2,000 minimum spend. The regular offer (available here) is half as generous: 25,000 bonus points with a $1,000 minimum spend. This can add up to 10 or more free flights depending upon how you redeem the points. For the Seat 31B traveler, no other offer comes close. 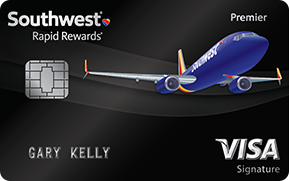 Grab this deal and support Seat 31B!

Southwest has a different frequent flier program than most. It is based on points rather than miles and is revenue based. So, this program can be considerably more lucrative for many domestic flights than other frequent flier programs. This is because the price of awards is loosely based on the price of a paid ticket, although not exactly. There are “sweet spots” based on the day of the week that you fly and the airport you fly from.

What are some of the better award rates? If you are getting 1.5 cents in value per point or greater, you’re doing pretty well. Redemption values will vary from as low as 1.2 to as high as 1.9 cents per point, with the highest prices on popular dates and routes (particularly booked last-minute) and the lowest ones booked on less popular dates and routes (particularly in advance). The sweet spot is short-haul flights booked in advance. I use Southwest points when I can plan ahead and when I can be flexible to get the best deals and have flown from Los Angeles to Seattle for under 5,000 points. A trip between Ontario and Sacramento I’m taking in December cost only 2,819 points. When you compare this to other programs, it’s an incredible value. British Airways, generally considered the best “legacy” airline program for short-haul flights, now charges a minimum 7,500 points for a short-haul flight.

Another advantage of the Rapid Rewards program: no cancellation fees. I will often use Rapid Rewards for speculative bookings where I’m not 100% sure whether I’ll actually take a trip. I’ll book the ticket well in advance to lock in the best redemption rates, and if I can’t actually go, I can cancel the trip without penalty. As long as you cancel 10 minutes or more before the flight’s departure, you will get back all of the points. Also, don’t forget to keep checking to see if the price goes down. If it does, just refund your ticket and re-book at the lower rates. This happens more often than you might think!

Finally, don’t forget that Southwest charges no baggage fees. I fly them fairly often if I need to check bags, because you can check up to 2 bags free of charge. This saves you $120 versus most airlines on a round-trip flight (if you check two bags). On short-haul flights where the fares are low anyway, baggage fees on other airlines can sometimes exceed the fare!

There are different flavors of the current best offer. This version has a $99 annual fee and $2,000 minimum spend, but you do get most of the value of the annual fee back because it awards 6,000 bonus points at each renewal and includes free drink coupons. Also, if you use our magic link, Seat 31B receives 5,000 bonus points. Other offers for the same card may waive the annual fee for the first year (these are targeted offers for which you may or may not qualify), but with those deals, you don’t get the bonus points at renewal. This card also has no foreign transaction fees, which isn’t the case with all Southwest Airlines cards. I’m comfortable offering this card because I’m confident there isn’t a better deal out there, and it represents a good value for Seat 31B readers.

I don’t personally have a lot of experience flying Southwest Airlines. The primary reason? I’m from Seattle, and I have spent most of the last 5 years living abroad. Southwest was, until very recently, virtually useless for international travel (they added a few holiday destinations abroad in the past few months). Although Southwest has offered Seattle service for 20 years (after they acquired Salt Lake City-based Morris Air Service), they serve a relatively small number of destinations and don’t have a large number of direct flights. Or a large number of flights, period. Seattle is overwhelmingly dominated by Alaska Airlines and Delta.

Even if you overlook all of the above, the destinations Southwest serves from Seattle are often less convenient. They fly to smaller, out-of-the-way airports like Oakland instead of San Francisco, and Love Field instead of Dallas. Want to fly to Los Angeles from Seattle? You’re not getting there without a connection, and practically everyone else offers a nonstop. Southwest is also really quirky. It does not offer baggage agreements with other airlines, so if you’re connecting to another airline, you will have to claim your bag and re-check it. Southwest is also not a member of any airline alliance, so they offer you access to only their own route network. And they are very proud to serve exclusively peanuts on their planes. I’m allergic to peanuts. Are you a person of size? Watch out! Southwest may charge you for an extra seat, and they are not shy about doing so if you cannot fit comfortably in a regular economy class seat.

More importantly, Southwest doesn’t generally have lower fares than other airlines, and they only sell fares through their own Web site. And the biggest reason why you’ll almost never see Southwest mentioned on the sites of most other travel bloggers: Southwest does not offer a first class cabin. All seats are in economy class (some with unusual configurations, such as family seating sections with rear-facing seats), and seating isn’t even assigned. You board by group (based on when you checked in) and just grab any open seat.

There are upsides to flying Southwest, though. For an airline, they are exceptionally customer-friendly. They don’t charge any change fees, as long as you change your flight at least 10 minutes prior to the scheduled departure. They also don’t charge baggage fees for up to two checked bags. And of course, you don’t have to pay any fees for carry-on bags. So, if you need to check luggage or think you might change your plans, Southwest might be for you. Southwest also has a very friendly company culture. The flight attendants are famous for singing on planes. The company is known to be family-friendly, going out of their way to ensure that–in the end–families are seated together. And Southwest is innovative: they were one of the first airlines to offer electronic tickets, as well as check-in kiosks (although Alaska Airlines did beat them to both of these).

Should you fly Southwest? It depends. If you insist on flying in a premium cabin, Southwest is not for you and will probably never be for you. If you need to check bags, compare the total cost of a flight with another airline including bag fees to the cost of a Southwest flight. You may well find the total package to be less expensive with Southwest. And if you’re comfortable taking an extra connection, or flying into a smaller airport, Southwest might be a good option if the fare is lower. So, if you’re entirely OK with Southwest’s quirks, it’s probably worth comparison-shopping on southwest.com. Remember, you will not find Southwest fares on any other travel Web sites.

This is the first installment in a 2-part series. In the second part of this series, I introduce the Southwest Rapid Rewards frequent flier program.