Xiamen Air offers some really cheap flights from Seattle to destinations in China and throughout Asia. The catch? You end up stuck overnight in Shenzhen, Xiamen or Fuzhou, China.

Not to worry, though, right? Xiamen Air provides a transit hotel. The details on their Web page are as follows:

1. All flights are carried by Xiamen Airlines. (code-sharing, chartered flights are not applicable);

2. Connection time of transit passengers is within 6 to 24 hours in Xiamen (G Class and Z Class are not applicable);

3. Must contain at least one international(regional) flight in the ticket;

4. The service contains only free hotel, passengers have to pay for meals and the other transportation fee.

The position of transfer counter:

My tickets qualified. I called the US toll-free number to confirm, so it seemed like I was golden. And I have to admit, the room that was promised sure looked nice: 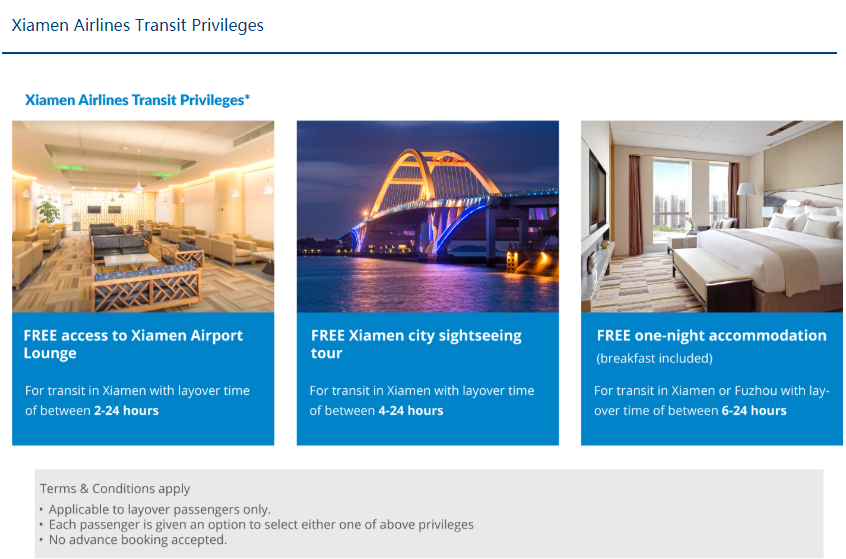 Wow, what a nice hotel room. Would have been great to stay in it!

Now, if you have experience in mainland China, and with mainland Chinese airlines, you probably know where I’m headed with this. In China, this sort of thing is rarely easy to arrange in practice and also rarely works as advertised. While other airlines in other parts of the world might be expected to whisk you from your flight to a hotel room with a seamless transfer, Xiamen Air makes you figure out how to ask for the benefit when you arrive, and then they hit you with a couple of serious “gotchas.”

When I arrived in Xiamen, and again in Shenzhen, I had to hunt around for the desk that could issue the voucher. In Xiamen, it’s a desk labeled “transfer services.” In Shenzhen, you have to go upstairs one floor from the baggage claim and find the ticket counter (where they sell tickets). This agent can take care of the hotel voucher. I’m not sure where to look in Fuzhou, but the guy who was sitting next to me on the flight to Shenzhen, and who continued onward to Fuzhou, emailed me and told me he couldn’t figure out how to get the room (or whether it was even possible) so he ended up sleeping in the airport overnight.

Gotcha #2: You Share A Room With A Random Stranger (Or Pay Extra)

When I arrived at the transfer counter for my room, some forlorn-looking guy was standing there waiting. “I guess we’re roommates,” he said. Um, maybe not. I insisted on escalating as far as possible, speaking to a supervisor, and showed screen shots from the Web page. It was no matter. The supervisor had heard it all before. She pointed to a laminated form and said “you must choose, either share a room (!) or pay 135 yuan (about $21) extra.” 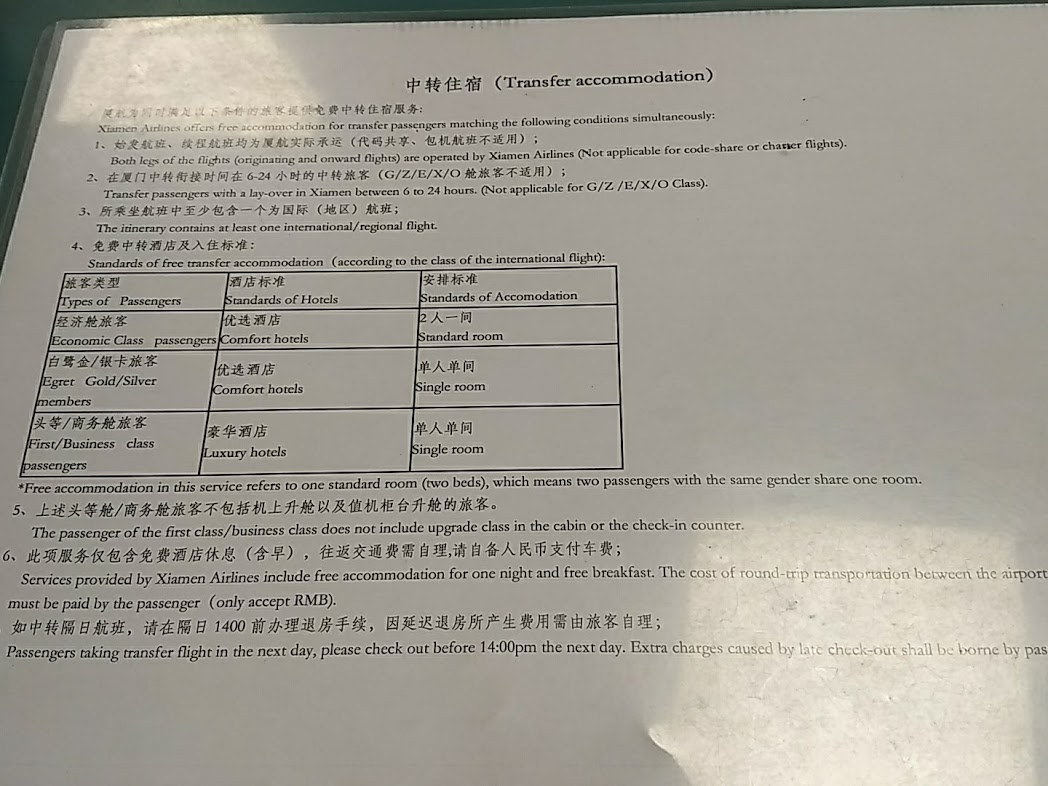 Oh, you thought you’d get your own room? What a strange Western idea.

This was discussed and explained in Xiamen but it was never discussed in Shenzhen (leading me to believe a different set of circumstances applied there). In Shenzhen, I arrived at the hotel, got my room, took a shower and was fast asleep when some random guy started trying to get into my room! Apparently the front desk had given him a key based on this crazy airline policy. The guy then tried to argue with me (in barely understandable English) that he was going to be my roommate etc. but I was having none of it. I shut the door, sent him back to the front desk and unplugged the phone. The hotel staff didn’t speak any English so I figured that would settle the matter (it did). It’s a good thing I’d locked the door with the chain from the inside! Otherwise, who knows what random stranger might have been trying to climb into bed with me.

In Shenzhen, the airport hotel has a shuttle that comes and picks you up at the airport, takes you to the hotel, and then returns you to the airport the following morning. You know, like you’d expect an airport hotel to do. In Xiamen, however, you have to take a local taxi to and from the hotel. However, this requires local currency, and the ATMs are all upstairs, and the airport closes down early, so you don’t have an easy way to get local currency for the taxi. Also, returning the next day, it’s hard to get a taxi on the street because the taxis have moved to using dispatch apps. This means you’ll need data service that works in China and an app called DiDi on your phone in order to get a taxi.

Both hotels were very local and Chinese. In Xiamen, it was the HMYL Hotel. It’s a basic Chinese business hotel on a leafy tree-lined street in central Xiamen. The room was typically Chinese with a hard twin bed, and was poorly soundproofed. Hotel staff was friendly but spoke no English.

In Shenzhen, the hotel was called the James Joyce Coffetel. I don’t know exactly what a coffetel is (coffin hotel? I wasn’t dead. Coffee hotel? No coffee in the room), but it had a room, and it was fine apart from being at the end of the airport runway (planes made the windows rattle starting around 6 in the morning) and being across the street from a giant noisy construction site. And, of course, apart from giving some random stranger a key to my room at 2am. They had a shuttle to and from the airport at least. 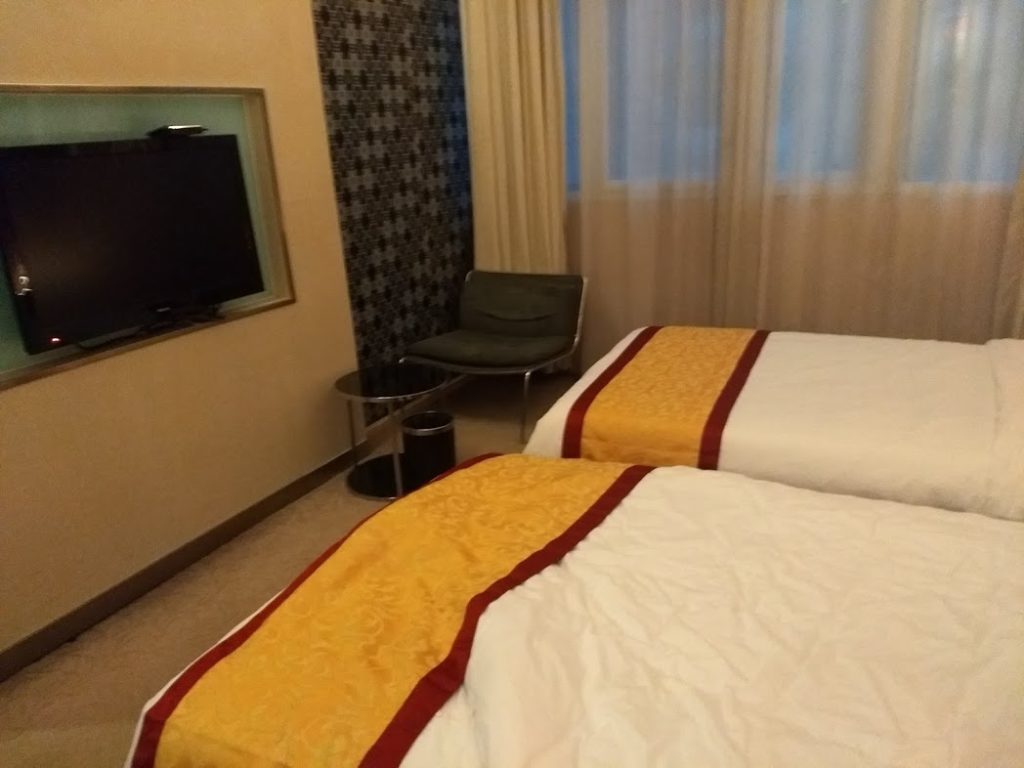 Tiny business hotel room with two beds in Xiamen. Should have been free, cost about $30 all-in. 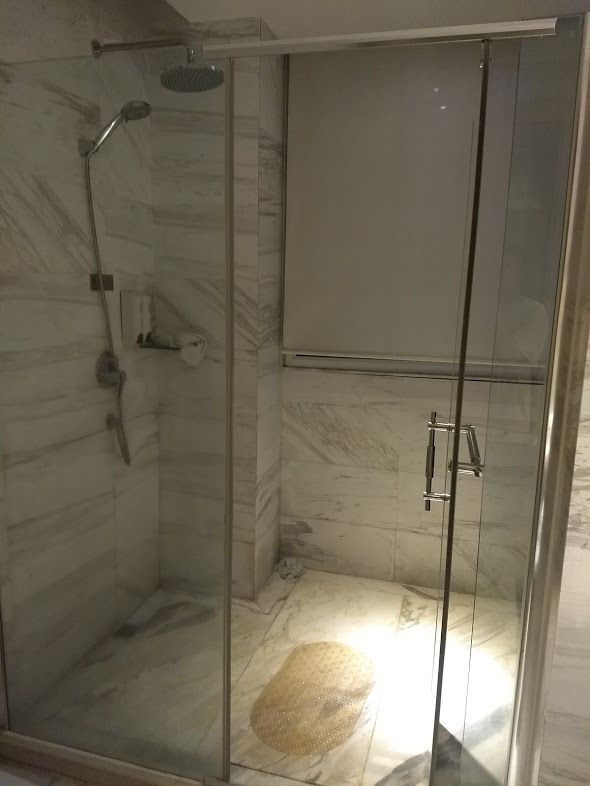 Large walk-in shower. This was nearly as big as the rest of the room. 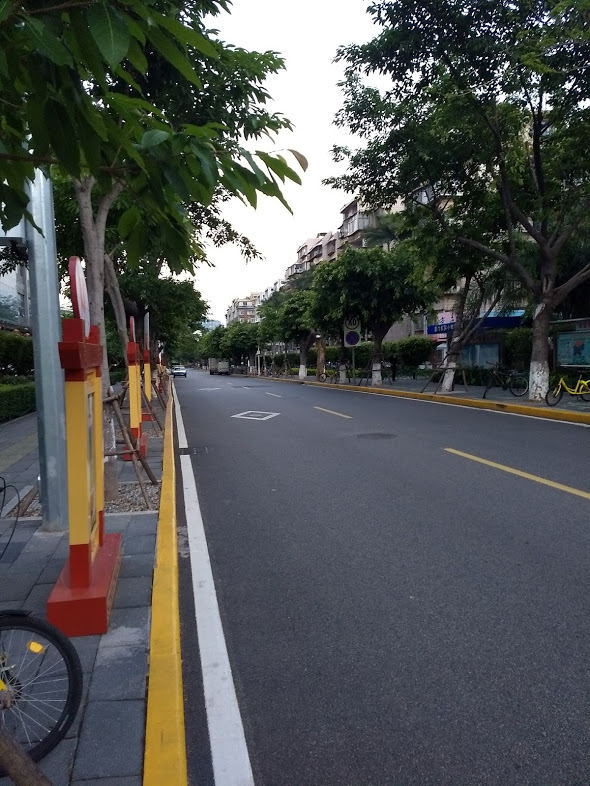 The Xiamen Air transit hotel is in a pleasant neighborhood with tree-lined streets.

I should probably point out that I lived in mainland China for 3 years and speak basic Chinese, but without that, I would probably have never ended up at either hotel. 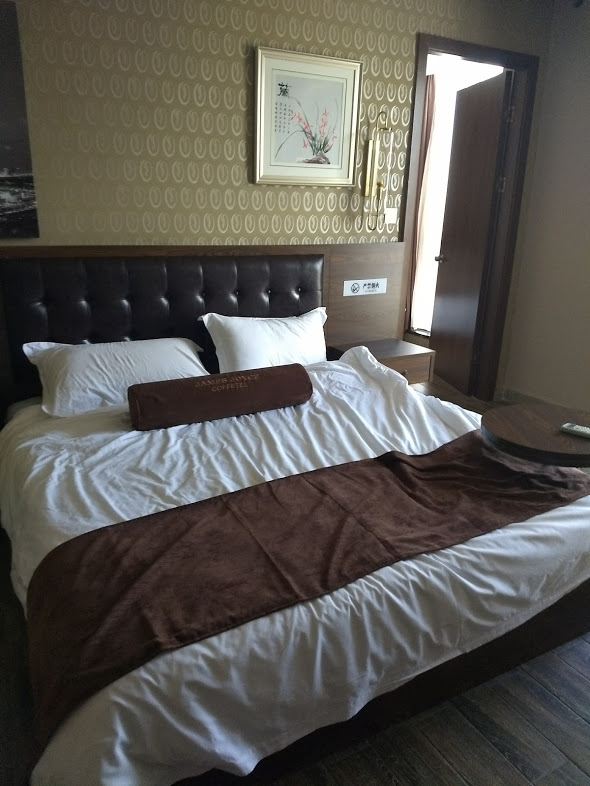 The bed at the Shenzhen James Joyce Coffetel was more neatly made than this when I arrived, I put it back together for the picture 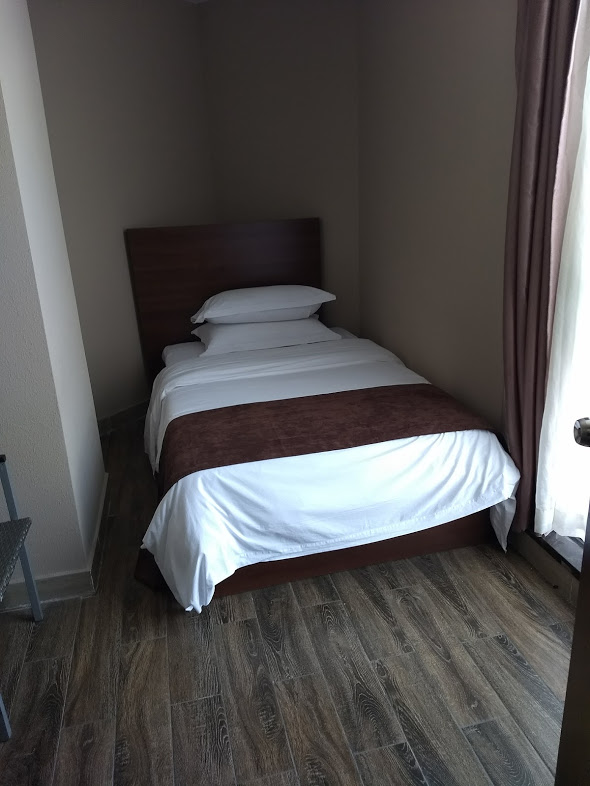 Second bed in a side bedroom. I didn’t sleep in this one. And the random guy who tried to come in at 2am didn’t either. 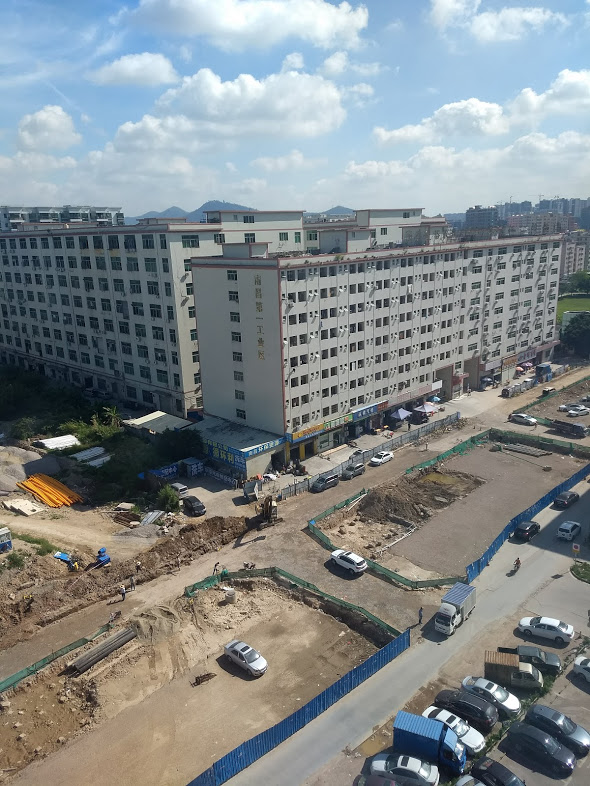 Xiamen Air Staff Are Great, Despite It All

I have nothing bad to say about any of the employees I interacted with at Xiamen Air. Each and every one of them was kind, polite, and professional, and many went above and beyond for me (in Xiamen, a wonderful kind airline employee escorted me upstairs to the closed part of the airport so I could use the ATM, and then helped me get a taxi to the hotel without being ripped off). I think the airline puts them in a difficult situation of over-promising and under-delivering, and they’re all just making the best of it.

The Xiamen Air ground experience seems almost deliberately designed to strand Western travelers unfamiliar with navigating China and without a command of the Chinese language at the airport. Even with extensive China experience and the ability to speak basic Chinese (as long as I’m not trying to do it out of context or over the phone), I was thrown for a loop by the unadvertised shared room policy. It is understandable to do this when two people are traveling together on the same ticket, but hooking you up with a random stranger is absolutely insane. Unexpectedly giving someone a key to your room with no advance warning is even worse. And requiring foreigners to navigate the process of catching a taxi in Xiamen to and from the hotel (in Chinese) is an awful lot to ask.

If you’re prepared to pay extra and negotiate for your own room, and if you can speak Chinese and are familiar with how things operate in mainland China, you’ll probably manage (like I did) to muddle through. However, if you can’t speak Chinese, and you don’t have experience thinking on your feet in mainland China, you might find yourself sleeping in the airport instead.