You know that stage of a relationship where there isn’t any love left, you’re sleeping in separate bedrooms, but you have kids so you put on a strong public face and stay married for the sake of the children? That’s my view of the relationship between Alaska and American Airlines. It has been steadily deteriorating over time, and while many frequent fliers had a lot of (I think false) hope after Alaska split up with Delta earlier this year, the writing has been on the wall for some time.

If you follow airlines closely, you knew something was seriously awry when American began flying from Seattle to Los Angeles earlier this year. This was the only American hub where American didn’t have service on its own aircraft from Seattle, instead relying on Alaska to provide connecting flights to its domestic and international services. And Alaska is fully capable of doing this. They operate 14 nonstop flights a day between Seattle and Los Angeles, not counting an additional 4 Virgin America flights per day. Absent any rift in the partnership, there was absolutely no need for additional lift in this market–a market so competitive (in between Delta, Alaska, Spirit, United and now American) that fares are often as low as $59 each way. Also, consumer preference almost definitely isn’t in play; American service is inferior to Alaska in just about every way so it’s hard to imagine many consumers going out of their way to fly American over Alaska.

Meanwhile, though, Alaska fliers are the “kids” in the relationship. Despite struggles in the marriage, it has been very good for us with reciprocal frequent flier benefits. Elite frequent flier members have benefited from free bags and priority check-in, boarding and seating. For those of us in Seat 31B, however, the best part of this has been some very cheap mileage fares in economy class when booking with Alaska miles. 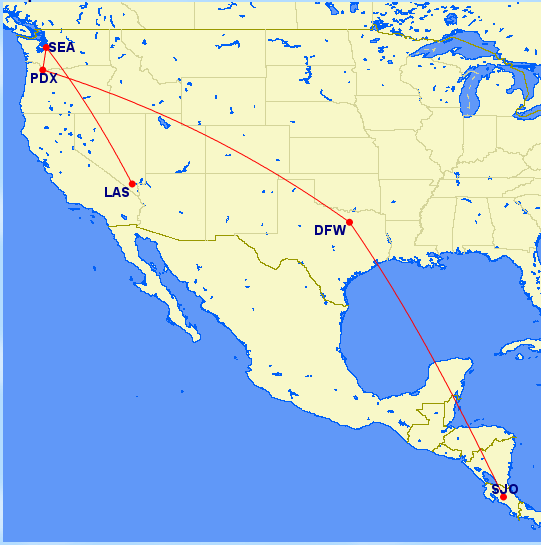 There are some particularly good sweet spots on the Alaska Airlines award chart with American Airlines, especially their off-peak flights. I flew to Barcelona on May 14th this year for just 20,000 Alaska Airlines Mileage Plan miles in American economy class, because Alaska follows the “old” AAdvantage peak/off-peak rules. I also flew from Costa Rica to Seattle, enjoyed a long stopover, and will be continuing on my journey to Las Vegas later this month. This cost only 15,000 miles–also an off-peak award. These are some of the best deals on the Alaska Airlines award chart–and more importantly, these awards are achievable for ordinary people who aren’t flying every week or doing crazy stuff to get miles.

There will likely be howls of protest from the blogosphere, but I don’t think they’re really justified. American massively devalued its own award program more than a year ago. It was untenable for Alaska Mileage Plan members to continue getting a better deal on American awards than AAdvantage members, particularly given that American flyers could easily credit their miles to Alaska. I knew this couldn’t last, and put my money where my mouth is: I have been burning my own miles on the best awards.

What’s next? Well, divorce probably isn’t in the cards, not yet anyway. At the end of the day, American and Alaska need each other–Alaska has very strong service throughout the West that American doesn’t have, and American serves Midwestern cities Alaska doesn’t. So this is the stage of the relationship where Alaska and American are no longer sleeping under the same roof; they are formally separated. But they’ll still put on a brave face and show up at the middle school parent-teacher nights as a couple. All of the changes go into effect on 1/1/18, so you will have until then to earn and redeem at current levels.