For pretty much the entire history of St. Helena Island, the only way to get there has been to take a boat. In recent times, this has taken 5 days each direction from Cape Town aboard the RMS St. Helena. However, you can now fly there, and while there will undoubtedly still be opportunities to arrive by ship (most likely by cruise ship), the vast majority of travelers will be flying.

However, believe it or not, it’s surprisingly difficult to book a flight there. It’s not the most complicated ticket in the world to book, but it’s close. Let me first get one thing out of the way: Unless you somehow have an absolutely crazy number of South African Airways Voyager points (because the only award flights available are extremely expensive under this program), this flight can’t be booked with miles. Airlink is an affiliate of South African Airways (SA) and operates their flights with SA flight numbers, but they don’t participate directly in StarAlliance. This means their flights aren’t bookable with StarAlliance miles like SA flights are. They’re only booked with South African Airways Voyager points. Unless you’re in South Africa, there is no easy or practical way to obtain these.

This means you have to book with cash. However, even this is very complicated because the airport is so new that it doesn’t show up on a lot of online travel agencies yet, and because the airline (Airlink) publishes fares between only an extremely limited number of cities.

Want to book a flight to St. Helena? Most travel sites (such as Priceline) can’t handle it.

So, the next thing I thought was using bank points. Unfortunately none of the bank portals work, so forget using bank points to buy the ticket (unless you have a card that lets you use the points to reimburse a charge made on another travel Web site).

On Expedia, the airport doesn’t exist. It does on Priceline, but you can’t actually book any flights to St. Helena; the booking engine doesn’t seem to work for this airport on the back end. Just before Christmas when I was buying my ticket, no travel agent site I tried could sell me the ticket.

Of course, you can always try to buy directly from the Airlink Web site. It theoretically works but is difficult to navigate, links you off to South African Airways, charges you in South African Rand, isn’t really set up to deal with US cards, and … well, let’s just say that banks in the US typically take a dim view of making charges on African Web sites. If the charge goes through at all (which it didn’t for me), expect it to be immediately flagged for fraud.

American Airlines has a really powerful booking engine because the Sabre reservations system was originally developed by them. They used to be able to sell you tickets for almost any flight on any airline on their Web site (you had to use “Advanced Search” but it worked). Unfortunately they don’t do this anymore. So I tried calling them. The agent found the flight, quoted me a price, started to sell me a ticket, and then stopped and refused to proceed. It turns out that now, they’ll only sell you a ticket if an American flight is included on the itinerary. Since I wasn’t also buying a ticket on American, they wouldn’t take my money. I was surprised, but not surprised–it is American, after all.

This gave me an idea though. Airlink is an affiliate of South African Airways, which is a StarAlliance member. Well, United is also a StarAlliance member. Might it be possible to buy a ticket on the United Web site? I’d looked for award tickets, but hadn’t looked for paid ones. As it turns out, you can, and it’s reasonably easy. Not only is it possible to search for flights an entire month at a time (so you can easily find what day the flight operates), but you can book it on a US Web site and pay in US dollars. And you can book the real price, not the Orbitz price with fake taxes included: 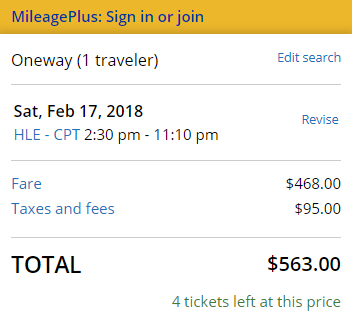 Buying tickets to St. Helena from United instead of Orbitz will save you almost $30.

I was buying a ticket from Johannesburg and returning to Cape Town, so I didn’t even notice the routing problems you can encounter. More on that later.

Last week, Orbitz became the first major travel booking site to start selling tickets to St. Helena. Sort of. The site does technically work, but it’s very hard to search for flights (because there is only one flight a week and it doesn’t always go on the same day). Also, the site sneakily (and I think borderline deceptively) charges close to $30 in fees hidden in with the taxes: 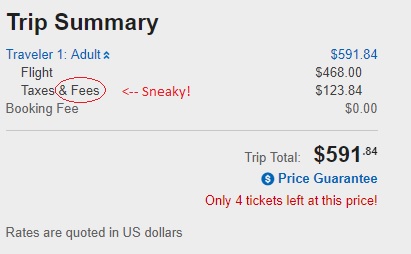 Orbitz sneaks fees disguised as taxes into your ticket price!

Forget Buying A Through Ticket

Of course, there is another problem: Even if you’re using the United Web site, you can’t search for flights and buy tickets the way that you normally do because of how the fare is published. What does this mean? Well, normally, when I want to fly from Seattle to somewhere, I look for a ticket directly from Seattle to that destination (in this case, Jamestown, St. Helena or HLE airport). Here is what happens when you do that:

I assure you there actually are flights. You just searched wrong.

The problem is that Airlink, the operating carrier, only appears to publish two routes to and from St. Helena, one each from Cape Town and Johannesburg. So, if you’re trying to buy a ticket to or from anywhere else involving St. Helena, you can’t actually do it. You have to buy a ticket to South Africa from wherever you are, and then another ticket onward to St. Helena from there.

It’s Worth The Effort

St. Helena is one of the world’s most unique and special destinations. Visiting is an incredible experience. As much effort as it has historically been to visit, the island hasn’t been overtaken by tourism yet. Now that visiting doesn’t require a 10-day roundtrip on a boat, the island is much more accessible than before. Go now!

7 thoughts on “How To Book A Ticket To St. Helena”