I’m getting ready to embark on another crazy itinerary. Next week, I leave for Europe. Hopefully everything goes according to plan.

A few months ago, in the frequent flier program of a small airline, there was an incredible sale fare on flights to Turkey. You could book flights to one specific airport for the same number of points as a domestic trip within the US would cost. I happened to have points with this small airline, so I booked two trips. The last trip I took apparently got me added to a TSA watch list, but it did get me to our office in Zagreb cheaply. Well, glutton for punishment that I am, I’m doing it all again.

Unfortunately I ran into a snag this time. I wasn’t able to find any availability back to the US from Zagreb on points. It’s incredibly challenging to find transatlantic award availability. This is the type of scenario in which you want as many options and as many different kinds of points as possible. Unfortunately, the only points that I had in any significant quantity, which didn’t involve fuel surcharges originating from Europe, were Alaska Airlines Mileage Plan miles. And these only didn’t involve fuel surcharges if I booked on American Airlines, a nearly impossible task.

A ton of searching later and I found a way back–but it was awful. I’d have to fly from Milan to Miami, stop over for two days, and then I’d be able to continue back to LA. 30,000 miles and some money. It wasn’t perfect, but it’d work. The alternatives were to pay a ridiculous fuel surcharge to fly British Airways (more than half the cost of just buying a ticket) or to pay a ridiculous award price and an even more ridiculous fuel surcharge to fly KLM and Delta using my Delta points. I had US Airways Dividend Miles, but these didn’t help because they only worked for roundtrip itineraries. So, I gritted my teeth and booked it. I guessed I’d figure out a solution. I always do.

By chance, I reconnected with an old friend who lives in Miami. He offered to let me stay in his condo, which would soften the blow of the bad itinerary somewhat. A month or so later, he contacted me. “You know, I forgot that you’re coming during Memorial Day weekend,” he said. “You really don’t want to be in Miami Beach then. It’s an absolute zoo. Everyone who lives here gets out of town because it’s absolutely overrun with insane tourists.” Ugh. That definitely wouldn’t do, but I also wouldn’t be able to cancel my Alaska Airlines Mileage Plan award ticket without paying a ridiculous award redeposit fee. Unless……..

Late last year, Delta ran a challenge for Seattle-based SkyMiles members to go for gold status. Nominally, I live in Seattle–I still have a house there, my mail is sent there, and I’m there enough to maintain legal residence. The promotion involved taking two Delta flights at full fare (anywhere in the Delta system), whereupon Delta awarded 25,000 bonus miles and Gold status for a year. I had two short-haul flights from Los Angeles that I needed to take anyway, and it only cost about an extra $150 to book in the fare classes that Delta required. Status didn’t really matter to me, but the 25,000 bonus miles made it an easy calculation. Even though Delta SkyMiles is an awful program, 25,000 bonus miles are worth at least $250. So, $100 free, just for filling out a form online? Sure! I booked on Delta, and was awarded Gold status. Little did I know that this would save me a bundle of dough later.

Now, Alaska Airlines is running a status challenge for Delta SkyMiles members. You can see where this is going. Just ask Alaska to match your Delta status, and they’ll do it. I sent in the request, and was granted MVP Gold within 2 days. And guess what? MVP Gold waives award redeposit fees! So, I went about searching for alternative flights across the Atlantic. In the interim, my US Airways Dividend Miles account had been consolidated with my American Airlines Aadvantage account, giving me access to one-way awards. What’s more, my US Airways Dividend Miles card–which I scored a few weeks before the program ended–netted me a 10% discount on award redemption. Still no availability from Zagreb, but an airBerlin flight was available from Milan on the 25th with an easy connection back to Los Angeles. No fuel surcharge! I wouldn’t get any work done in the US over a holiday weekend anyway, so why not spend it in Italy? I quickly booked the flight, for a total of 27,000 Aadvantage miles. Honestly, I have had nothing but uncomfortable flights and bad luck with American Airlines on transatlantic legs. I know most other bloggers love them, but they haven’t been good to me and I was happy to avoid them this time.

A quick call to Alaska Airlines later, and as a newly minted MVP Gold, my horrible itinerary through Miami with a holiday weekend stopover was cancelled and the miles were back in my account. There is one thing that can be said for status with frequent flier programs: it gives you more flexibility when booking awards, and you can get a lot of expensive fees waived. It’s rare that I will incur enough such fees in a year to make status even remotely worth chasing, but this year, I have avoided hundreds of dollars in checked baggage fees and award redeposit fees through maintaining status with airlines.

A free ticket to Istanbul…

..and a free ticket back from Milan. But I was actually going to Zagreb.

You might be thinking “Wait, what? Air Serbia? You mean, the flag carrier of Slobodan Milosevic’s former regime? The flag carrier of the country that had a civil war with Croatia, and the country that still refuses to acknowledge Kosovo?” Yes, that Air Serbia. As of late, they have repaired relations with their western neighbor, sort of, to the point that there is commercial air service between the countries. By that, I mean one flight a day. And as it turns out, Air Serbia is part owned by Etihad Airways, so it might even be sort of safe. Most importantly, Air Serbia has a very interesting idea of what constitutes a “roundtrip.” They allow an open jaw under some circumstances. All I needed to do was use a hidden cities itinerary.

Oh yeah, hidden cities itineraries. You know, the thing that I warn people never to do because they can horribly backfire. Well, in this case, if I somehow ended up in Istanbul instead of Frankfurt (my connecting city) it would cost me 90 euro to fix the problem. Air Serbia is remarkably flexible when it comes to changes and cancellations, even on non-refundable fares. So I went ahead and booked the flight. FRA-BEG. 23 hours on the ground. BEG-ZAG. Then ZAG-BEG, 4 hours on the ground, BEG-MXP. Less than half the price of pretty much every airline. Why? This was considered a roundtrip. 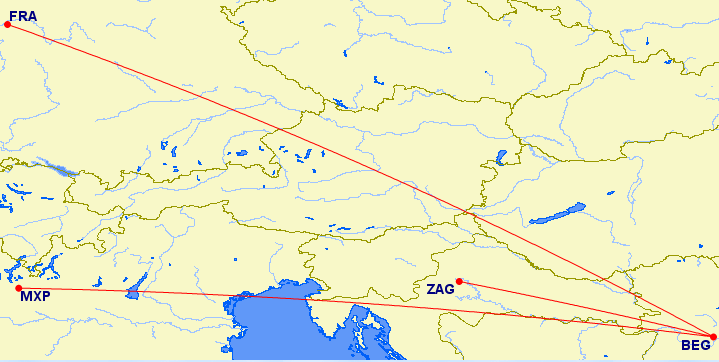 Why was it cheaper? This is considered a round-trip flight, rather than a series of one-way flights. Where flights to Zagreb are concerned, this ends up being cheaper. A lot cheaper. And when viewed from a certain angle, it is a round-trip flight. Frankfurt to Zagreb, with a layover (not a stopover, because it’s only 23 hours) in Belgrade, then turning around and returning to… Milan.

Wait, what? How is a city in Italy considered the return portion of a roundtrip ticket from Germany? Because this is an open jaw itinerary. Normally, fare rules don’t permit open jaws. However, Air Serbia has extremely liberal routing rules. All the crazy things that you can normally only do with frequent flier tickets are possible with their paid fares. Which is how, for less than $200, I was able to visit two additional European cities I haven’t previously visited (Belgrade and Milan), and enjoy a round-trip flight to Europe for free.

This all assumes that everything works out as planned, and I don’t end up in Turkey unexpectedly. If that happens, it’s going to suck. I don’t have any miles that will get me out of Turkey cheaply or easily. Fortunately, Air Serbia flies to Istanbul, and they will–for a fee–allow me to apply my ticket toward another one departing from Istanbul. So, I’d lose about $200 in the worst case scenario–still less than a British Airways fuel surcharge.

So, there you go. This is how to use the Open Jaw Jam. Keep in mind that while it’s generally difficult to do this with paid fares, you can often use open jaws on award tickets. This is where things get really interesting, particularly on intra-Asia award tickets. If you play your cards right, you can potentially visit multiple cities with vast distances between them, all on a single low-cost award.