I flew US Airways yesterday from Phoenix to Seattle. I had been in Phoenix for over two months, and it was a long day of packing up all of my stuff. One checked bag, a carry-on, and a backpack stuffed full of gear. Once I was on the plane, I grabbed my iPad. After reading for awhile, I tucked it into the seat pocket in front of me and nodded off.

I woke up again just when we landed. As soon as I was at the gate, I jumped up, grabbed my carry-on bag and backpack, and was on my way. I picked up my checked bag, headed out to my parents’ car, and we drove back to their house. I was happy that everything had worked out exactly as planned–my flight was on time and there were no problems with my bags. As usual, I pulled out my chargers for various devices and started plugging them in to charge. Right away, I noticed something missing. My iPad. Reality came crashing down and I realized where I had left it. 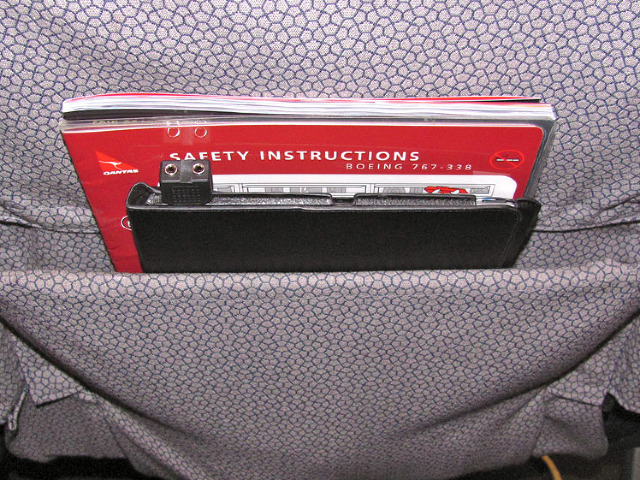 I wasn’t flying Qantas, but you get the idea.

I knew there was one more US Airways flight due to arrive in Seattle, so I jumped in the car and headed back to the airport hoping to find someone to help. Nobody was at the US Airways counter or at the baggage service desk, but two people were at the American Airlines ticket counter. I asked them for help, and they had a way to get in touch with their colleagues at US Airways (at the time of this writing, US Airways and American Airlines have merged but are still operating separately). One person was still working. She wasn’t able to meet me immediately, but agreed to meet me as soon as the incoming flight landed.

I met the very friendly agent at the baggage claim. She took all of the information about my incoming flight and went upstairs to look for my iPad on the plane. It wasn’t there, but the aircraft had already been cleaned so she got in touch with the cleaning company. This resulted in good news: one of the cleaning staff had found my iPad! The only problem was that it was locked up in the manager’s office, the manager was the only one with the key, and she had already gone home. At least I knew my iPad was safe, and the US Airways staff told me that I could call the following day to find out when I could pick it up. Nonetheless, I logged onto iCloud and marked my iPad “lost” on the “Find My iPhone” service, something that–in retrospect–I should have done as soon as I noticed it was missing.

The next day I dutifully called, left a message, and I received a call back the following afternoon: my iPad had been delivered to US Airways and I could stop by anytime to pick it up! I went to the airport and reclaimed my “baby.” It hadn’t been tampered with at all. As soon as I connected to the Internet, the “Find My iPad” service kicked in and locked me out, so I at least learned that this service actually works.

So, I lost my iPad and got it back. You may be wondering why this justifies an article. Most of the time I read about items going missing on planes, it’s about items that were lost, not found and returned. So, I wanted to show the other side of the story: sometimes, your stuff can make its way back to you! Here are the things that I think worked in my favor:

Acting Immediately: Every minute that separates you from your lost item is another minute that it could fly away. Aircraft cleaners don’t always find and remove everything, and airlines turn planes around for their next flight very fast. Airplanes routinely travel thousands of miles and through several cities a day. Once your plane leaves the airport, the chances of finding anything left on board substantially diminish and the time and trouble involved in getting it back increases, even if your item is found.

Asking For Help: I couldn’t find anyone from US Airways who was working at the time I arrived, but US Airways and American are part of the same company so I approached American to ask for help. This worked very well, and a seasoned and experienced American ticket agent sprang into action to help me solve the problem. Granted, most of the time you probably won’t be dealing with the product of a recent merger, but don’t limit yourself to asking only your own airline for help. Try approaching any uniformed airline staff member. Airlines do compete, but they also work together. The ground staff at most airlines will have phone numbers to reach the ground staff of any other airline and most are happy to help in a scenario like this.

Staying Flexible: The ground staff at US Airways was willing to help, but they weren’t quite ready at the time I asked. There was only one staff member working and while she was apologetic, she also wasn’t able to help me immediately because she was busy making time-sensitive logistical arrangements for a delayed incoming flight. I recognized that my case was an exception, and was patient, friendly and not demanding. This is my personality anyway, but it’s worth noting that people are a lot more interested in helping you to solve problems if you’re polite about asking them for help. As soon as the staff member was available, she did a great job of assisting me.

Lucky Location: Let’s face it, lost items are often stolen in airports. Entire Web sites are dedicated to stories about items pilfered, plundered and pillaged at airports by staff, other passengers and even the police. It’s enough to make some people think they might as well not bother trying to find a missing item. Seattle is one of the more honest cities in the United States, and I think that this helped. There is not a culture of corruption as exists in many American cities.

If you lose an item on a plane, take heart: you might get it back, if you follow my example and act quickly. And if you take a nap before landing, always remember to check the seat pocket before leaving the plane!