Any small business owner will tell you that starting a business is the fastest way to spend all of your money. I found a faster way, though: I went for an MBA and then started a technology company. As my bank accounts continued their gut-wrenching race toward zero, I knew that I couldn’t pay full price for a dentist appointment.

I found a shady Scottsdale dentist offering cut-rate cleanings on LivingSocial, so I went ahead and signed up. To my surprise, I was actually able to get an appointment (the usual deal with these things is that you pay and the service provider finds a way to weasel out of giving you anything, but strings you along until after you can’t get a refund), so I went in. I had no idea of the horrors that awaited me.

“Welcome to the practice,” said the hygenist, abruptly sitting me down in a chair and going to work on my teeth immediately. She wasn’t from the “gentle dental” school of thought, and I am guessing that maybe the hygenist previously worked in a prison hospital. I have never endured a more painful cleaning in my life. Blood filled my mouth as dental tools tore hunks of flesh from my gums. “Do you see this?” said the hygenist, shoving a piece of bloody gauze in my face. “This came off of your back tooth! IT WAS BLACK!” Looked red to me. The scraping and scolding continued until finally, mercifully it was over. I rinsed my mouth out on command, and it came out red. “This is GUM DISEASE!” said the hygenist. “You are NOT a candidate for teeth whitening.”

Aha. Now I understood and it all became perfectly clear. The LivingSocial deal was for a cleaning and teeth whitening. But if I “wasn’t a candidate,” they wouldn’t have to provide the more expensive part of the deal, leaving me paying a slightly discounted rate for a cleaning only. The actual dentist came in. “How did you like our hygenist?” he asked. I didn’t say anything, and he said “She is one of the best hygenists you will ever encounter, your teeth will never be cleaner.” Poking around inside my mouth, washing blood off of my teeth so he could see what he was doing, he finally said “You have a cavity, tooth #3. We can fill that now if you’d like.”

I didn’t like. Absolutely not. I wanted out of there as quickly as possible. On my way out, the front desk provided me an estimate for $240 to have the filling done if I wanted to come back. They also recommended a $700 mouth guard because I was supposedly grinding my teeth at night (something no dentist had previously told me). Calling around to other dental offices in Phoenix, I was surprised that $240 was the market rate for a filling, which was entirely ridiculous to me. In Beijing (where I lived for 3 years and which I’m still using as a point of reference for whether costs are reasonable), the cost is about 10% of that.

And so it was that I found myself driving yesterday to Los Algodones, Mexico. This tiny Mexican town, only 9 square blocks, has perhaps the largest number of dentists per capiita of anywhere in the world. I followed my trusty Garmin GPS, which took me through Yuma, across farmland, up onto a river dike, and smack into a highly suspicious Border Patrol officer who wondered what, exactly, I was doing there. 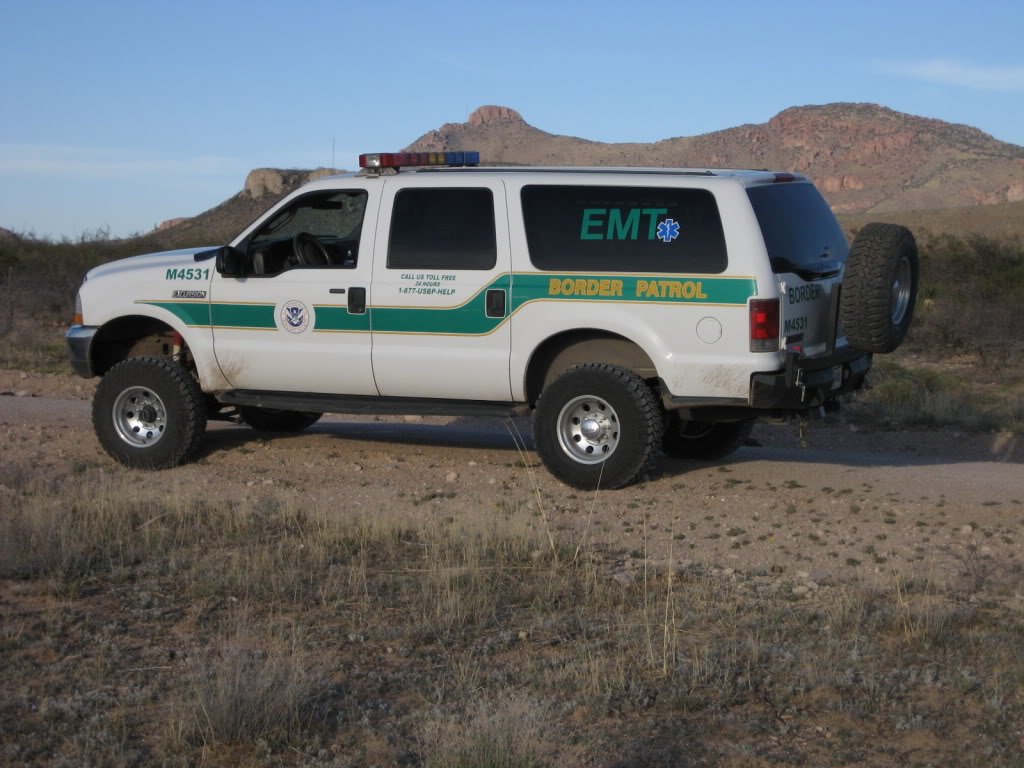 A US Border Patrol vehicle similar to the one I encountered

I pointed across to what appeared to be Mexico and said “I think I’m going there, I have a dentist appointment, but the GPS apparently doesn’t know that a river is in the way or that it’s in Mexico.” The border guard laughed and said “This happens a lot, Garmin, right?” He was friendly and gave me directions–which involved backtracking to Yuma, driving on Interstate 8 across the river to California, and then heading south from there. He also reminded me that the border closes at 10pm. “Get there early,” he said, “if you’re not through the border before 10, you’re going to be stuck in Mexico overnight.”

I made my way back through town, a trek back to the freeway that was several miles long. The exit was well signposted to Mexico. Along the way, several signs placed by the US government warned not to take any guns or ammunition into Mexico (this creates big problems with the local authorities). There is a parking lot operated by the local tribal authority (the border crossing is on tribal land), which costs $6. The lot is well guarded and is located directly on the border. If you’d like to see all the road signs, they have been collected here for your viewing pleasure.

It’s an easy walk across the border. You pass through a turnstile and you’re directly in Mexico. No authorities were checking documentation (this is normal in Mexican border cities because there are additional documentation checkpoints about 30km past the border). However, the Mexican INM office was open and available to stamp passports and issue tourist cards for people traveling further inland. I was traveling with only my Enhanced Drivers License and had no passport to stamp, so I didn’t contact them. 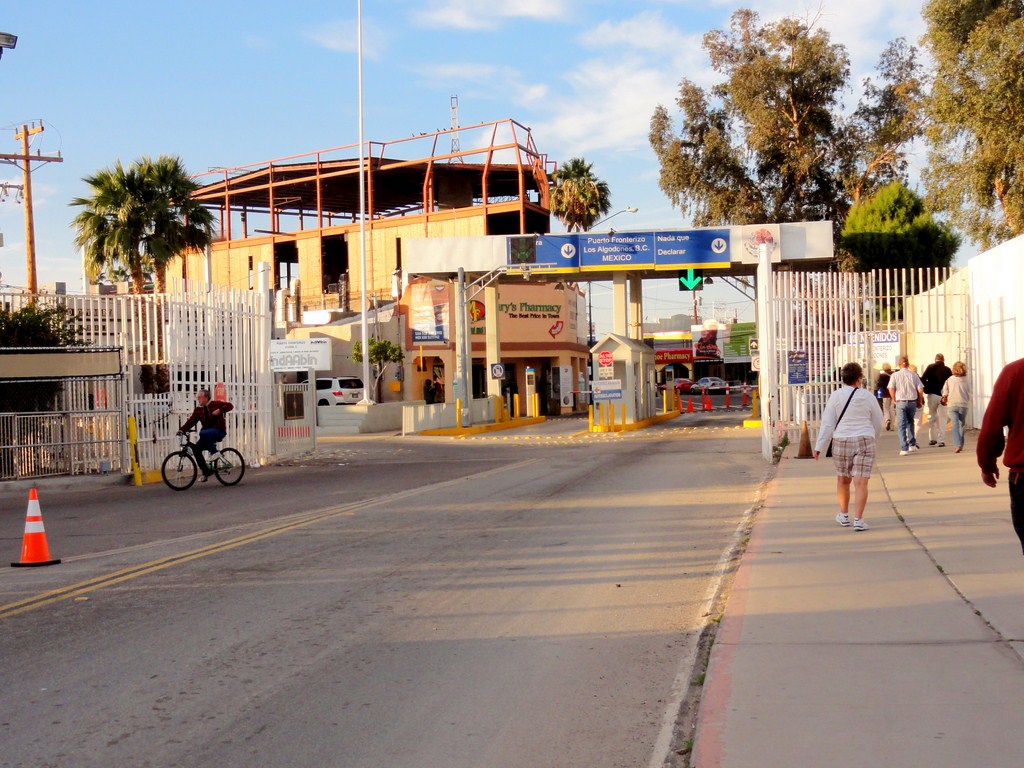 Border crossing as seen from the US side

I didn’t have an appointment anywhere, but figured I would be able to find a dentist’s office without much trouble because there were so many of them. Another expat steered me to an office called Clinica Dental Guadalajara, which turned out to be one of the only clinics still operating late in the afternoon. Most clinics close early, but the Clinica Dental Guadalajara stays open until 5:00pm Arizona time so local people from Yuma can make appointments after work. I described the service I needed and the front desk clerk apologetically stated “it will be about a 15 minute wait, the dentist is with another patient.” I was fine with that, and chatted with another of the Americans in the waiting room. I liked what I heard – she and her husband lived in Arizona, and always came to Los Algodones for their dental care. They had used several dentists, had a bad experience with one, and then someone recommended the Guadalajara clinic. They had been patients for a few years, had always been happy with the service, and were now confident enough to have major dental surgery done–which is what her husband was undergoing. Shortly thereafter they finished with him. He walked out into the lobby a bit unsteadily, the anasthetic starting to wear off, accompanied by two smartly dressed nurses who held his arm to make sure he didn’t fall. The dentist–speaking perfect English–went through all of the details of the surgery and the after-care with the couple, making sure that the wife understood every detail and that all prescriptions were filled. Medicine in Latin America is often very abrupt in tone, but this wasn’t the case here. I felt confident with what I saw.

Now it was my turn. I expected a clean, modern office with all of the latest equipment, so I wasn’t surprised. Everything was well organized and professional. The dentist and her assistant both spoke perfect English. Although I half expected there would be no cavity found on my tooth, the dentist confirmed there was–it was just very small so I hadn’t noticed. “It is good you caught it early,” she said. “You won’t need any anasthetic, I will only need to drill the surface. You should not feel any pain, but let me know if you do.” A quick inspection of my other teeth to make sure there were no other hidden problems, and she set to work, meticulously working with a tiny drill. This didn’t hurt at all, it actually felt similar to my teeth being cleaned with a rotating brush.

The dentist drilled and checked, then drilled and checked again. She was very meticulous about her work. Finally it was time to put in the filling. She used a white composite filing, the same as would be done in the US. Not happy with the bite profile, she drilled the filling a bit more to “shape” it properly, and I was on my way. I asked about the night guard the other dentist had recommended, and the special toothbrush. “You don’t need any of that,” she said. “I can see you are using a hard bristle toothbrush though, it’s really hard on your gums. Switch to a soft bristle toothbrush. The other dentist was definitely right about one thing, you do need to floss every day!” And then it was time to pay the bill.

Even after burning an entire tank of gas and driving roundtrip from Phoenix, I saved $150 all-in. No matter your political stripe, it’s hard not to see a big problem with this. For now, though, Los Algodones, Mexico is there for your own Discount Dental Dash! The quality of care is good, and the prices are some of the best I have seen in the world.