I book a lot of award travel – not just for myself, but for a lot of other people. It’s at least 10 tickets per month, and usually more than that, so I have gotten a pretty good sense for what is a good award and what isn’t. I have also gotten a good sense for when people get themselves into trouble. One of the biggest problems I see is that people try to over-optimize their award booking to the point of losing the opportunity to fly with points altogether. If you see a good deal, you need to book it right away. Just get the ticket and figure out the details later. This applies to all airline tickets, not just award tickets. Book first and ask questions later. 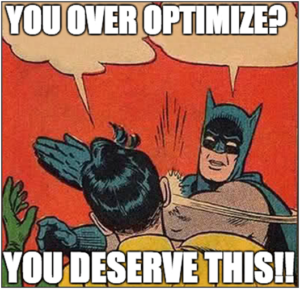 Sometimes I just want to…

What is over-optimizing? It’s going into an award booking knowing the fundamental bargain (or having been advised of it): airlines give away the seats they don’t think they’ll sell. Those seats aren’t the good seats on nonstop flights with perfect schedules. Instead, you’re flying cross country on a regional jet connecting to another regional jet in Columbus, or traveling on Ethiopian from Los Angeles to Dublin. In Seat 31B, and you’re lucky if it is anything other than that. And yet, even though you know this, and I briefed you, and you agreed to it, you just dither and dally and tweak and fiddle and try to get a perfect itinerary in Cathay Pacific first class instead of a perfectly good (and entirely reasonable) itinerary in Air China business class. When I say “If you want to go, you really need to book this right now before it’s gone,” you say “I need to ask my wife” and disappear for a day or three while you try to search for something better on your own.

Even though you hired me to help you. Trust me, although I’m not much of an expert at anything, I’m genuinely an expert at this.

Here’s how it ends, all too often. All of the available options evaporate in front of your very eyes because–against my advice (which you have actually paid for)–you don’t immediately book the one highly reasonable option that is available for your travel dates when it becomes available and when I urge you to book it. Traveling around Christmas and New Year? That’s why there was only one option and that is why that option wasn’t a nonstop (which you can almost never get anyway). It was a good option. An option you totally blew. And that is also why there isn’t likely to be another one. At all.

I think this is because people read too many blog articles and develop unrealistic expectations. You’ll never hear hype from me on Seat 31B, unless it’s about an unusually good economy class seat. However, other travel blogs so over-hype certain airlines and their business and first class products that literally everyone tries to book them and it means award availability is very limited. Here’s some tough love: You’re not likely to secure those “aspirational” awards at all, and you’re especially not likely to secure them over holidays, and extra especially when you show up 6 months after the booking calendar opened. Full-time bloggers have schedule flexibility where they can literally book and fly the same day, giving them access to last-minute inventory you can’t reasonably use. They all have relationships with the airlines and often fly on complimentary “industry” tickets. You don’t have any of that. Instead, you signed up for a few Chase cards and got a few hundred thousand points just like everyone else did this year, and they’re all chasing the exact same seats on the exact same dates.

What’s the reality? If you’re flying in a long-haul business class, it’s far nicer than economy class on pretty much every airline in the world. The baseline is so much of a step up from economy class that the differences between airlines are only incremental. For example, the difference between Air China and Cathay Pacific is pretty marginal. Slightly different catering, better English skill level with a Hong Kong vs. mainland Chinese crew, a different selection of alcoholic beverages and teas, and better lounges in Hong Kong vs. Beijing. That’s it. They will both get you to your destination safely in a modern lie flat seat, giving you a comfortable ride and a nice meal.

There are marked differences in economy class. You feel these much more. Premium economy is a major step up from regular economy class. And since there is more economy class award inventory, it is well worth favoring one airline over another (all else being equal). This is particularly true when you’re looking at 9-across vs 10-across economy class seating on a 777. This just isn’t the case with business class. If you’re getting a lie flat seat, worrying about one airline versus another is mostly worrying about which wine is catered. Does it really matter so much that you’d risk losing an opportunity to fly in business class for free?

Apparently, it was. You decided to push your luck. Not content with finding an itinerary that met all of your requirements and was really very good, you held out for something better. Except it wasn’t actually there, because airlines barely give away any seats during Christmas and New Year at all, and especially not premium airlines on premium nonstop routes. Instead, someone else snapped up the award you didn’t book. They were happy to have what you were trying to over-optimize. Your opportunity disappeared right in front of your nose. And I know exactly what’s going to happen next.

You’re going to be upset with me.

Want help booking your own award? Visit us at award.cat