I am seeing more and more people write about “hidden cities” itineraries lately. There is even a site called Skiplagged that will help you find them. I don’t think that enough is being said about the risk of using these. Things can very badly go wrong with these itineraries and if it happens even once, it is likely to cost you far more than you will ever potentially save.

“But wait a minute,” you might say. “Weren’t you just telling us about co-terminals and how you can save with these?” There is a big difference and it’s very key. Using co-terminals is allowed (and even encouraged) under the fare rules. However, using hidden cities is a big no-no in both the Contract of Carriage and in the terms of every airline’s frequent flier program.

So, what exactly is a hidden cities itinerary? Suppose you’re in New York, and you want to go to Miami. The weather in New York is lousy and everyone else has the exact same idea, so fares to Florida are relatively high. It’s $199 each way. However, you do a little searching with Kayak Explore, and you notice that American Airlines is running an “Amazing Alabama” sale with $99 one-way fares to anywhere they go in Alabama. “Hmmm,” you think, and you quickly find the following itinerary: 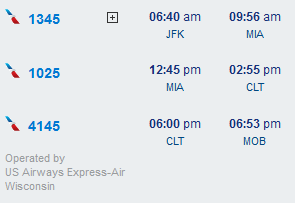 “I have a brilliant plan,” you might think. “Why not just get off the plane in Miami and skip all of the rest? I can go for half price!” Smug in your ingenuity, you buy a $99 ticket to Alabama and go to the airport, only to find out when you arrive that your flight has been cancelled. “The pilot caught the flu, so we have to reroute you” says the friendly counter agent. “Great news, though, we have you on a much better itinerary. You’ll get there much earlier!” she says, practically beaming, and hands you your new boarding passes. 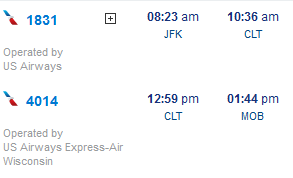 That sinking feeling in the pit of your stomach is real when you realize that your beach dreams are being replaced with … whatever there is to do in Alabama. It probably doesn’t involve a beach.

Thinking fast, you try to figure out a way to get back your original routing and salvage the trip. “I won’t get as many miles if I go this way,” you nervously say. “I was really hoping to get enough for the big trip I have planned.” An assured smile and the reply of “No problem! Just write in to Aadvantage after your flight, send in your boarding passes and original itinerary, and ask for original routing credit. They’ll take care of you. Enjoy your trip to Alabama!” says the agent with an air of finality, and you leave the counter defeated.

You’re now faced with a decision. You can abandon your trip entirely, and lose the $99 that you paid for your ticket. Fortunately that’s all you’ll lose; you weren’t sure when you were coming back, so you hadn’t bought a return ticket from Miami yet. You can buy a last-minute ticket, but a quick check of SkyScanner shows that the cheapest last-minute fare is $363 and it leaves at 3:50 this afternoon. This pushes your total cost to almost $500 and you’re going to be stuck for the whole day at JFK instead of sitting on the beach. Or, you could continue on to Alabama. “Maybe that’s not so bad, I’ve never been there,” you think. You start looking for things to do, and find this: 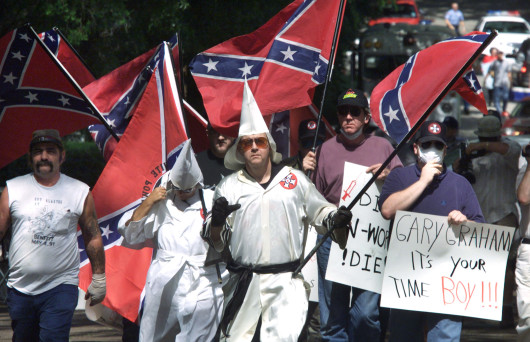 Since you’re already at JFK, you decide to go to the beach at Coney Island instead. It’s cold and covered in trash. Shady teens are hanging out on the street corners, doing a really bad job of hiding the fact that they’re dealing drugs. You are left alone to ponder your bad life choices.

OK, rewind. Suppose the above didn’t happen. Let’s say that your original itinerary worked. You totally got away with it. In fact, US Airways had a sudden last minute $99 fare sale from Fort Lauderdale to New York for the return, and you even got American Airlines Aadvantage miles. You showed off your tan in the office Monday morning, gloating about how you managed to score a peak season flight to a subtropical beach paradise for less than the cost of a limo to the airport.

Two months later, a letter arrives in your mailbox from American Airlines. It looks different from everything you’ve ever received from them, and it is a stern letter from their Account Audit department. The letter explains that the airline is fully aware of your shenanigans, outlines exactly what you did and the sequence of events, quotes the clause of the Aadvantage contract that you violated, and ends with the following quote:

Your Aadvantage account has been closed and all miles forfeited. While you are welcome on board American Airlines, you are no longer eligible to participate in the Aadvantage program.

That mileage balance you spent years accruing and were saving for a Christmas trip to Hawaii? It’s gone. You begin to think that maybe the $99 savings wasn’t worth it. What’s worse, you just realized that you could have flown to Fort Lauderdale, only a short train ride away from Miami, for the same price as your ill-conceived hidden cities itinerary.

As you can see, there is a lot that can go wrong with hidden cities itineraries. So much can go wrong, in fact, that booking them is almost never a good idea. And this doesn’t even get into the numerous other problems, such as only being able to take carry-on bags and being good for one-way fares only. Through the use of co-terminals and alternate airports, you can often find savings that are equal or better than hidden cities itineraries.

Skip hidden cities itineraries. They are a minefield on the best of days, and worst case scenarios can and do happen.