On my recent trip to Minneapolis, I was originally planning to return directly to Seattle on a nonstop flight with Alaska Airlines. However, after shivering in the frigid temperatures and looking at the terrible forecast for Seattle, I decided that it might be better to head somewhere warm.

Alaska Airlines has really been adding a ton of service to San Diego lately, and I was delighted to see that nonstop service from Minneapolis was starting the day I was leaving Minneapolis. Even better, saver level award space was available. This opened up a great opportunity for me because it was close to the Thanksgiving holiday and award space was very difficult to find. So I hatched a plan: fly to San Diego, rent a car, drive to LA, get an airbnb for a week, visit friends, drive to Phoenix for Thanksgiving with family, then back to San Diego, and finally, a flight back to Seattle. 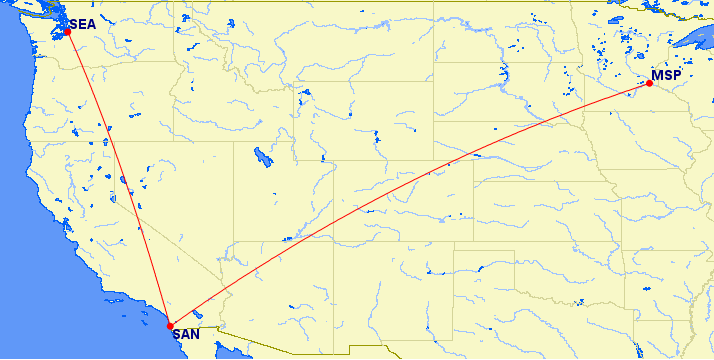 Well, the first order of business was changing my flight. I already had a flight booked from Minneapolis to Seattle using British Airways Avios. This had cost 10,000 Avios and $5.60 in taxes. However, if I simply changed the ticket with Avios, it’d cost a $55 change fee plus the difference in miles (another 7,500 Avios). British Airways charges per flight based on distance with a minimum cost of 7,500 points. This obviously wasn’t the optimal solution.

However, British Airways offers another option: you can cancel your flight and redeposit the Avios. This also costs $55, but there’s a loophole: the $55 is deducted from the taxes and fees already paid. If you cancel online, British Airways won’t refund any fees, but also won’t charge any additional. So, in effect, you can cancel domestic US flights booked with Avios for $5.60.

What does this mean? Alaska treats a trip from Minneapolis-San Diego-Seattle as a single ticket, even if you stop over for 10 days in San Diego. And if you can find space at the lowest award level, it means the trip costs only 12,500 miles. Stopovers are specifically allowed under Mileage Plan rules and while most people don’t take advantage, it’s an entirely legal and risk-free “hack.” The catch? You have to find “saver” level award availability (in economy class, “W” fares) for the entire journey. Your trip must be entirely on Alaska Airlines where a domestic stopover is involved (on partner awards, stopovers are only permitted in international connecting cities). And you can only take a stopover at a logical connecting point. San Diego was a logical connecting point for my trip from Minneapolis to Seattle, because it’s in the correct direction of travel and doesn’t exceed the maximum permitted mileage. Alaska does have some measures in place to prevent illogical connections, such as Minneapolis-Portland-Los Angeles-Seattle.

It’s not just in San Diego where you can take a stopover, and people in the Lower 48 probably aren’t the biggest users of stopovers. This is a really valuable benefit for folks in rural Alaska who often get stuck in Anchorage overnight before they can fly onward to anywhere. Without it, they’d effectively be unable to book award tickets to anywhere other than Anchorage. Additionally, many folks traveling from Alaska to the Lower 48 stop over in Seattle for shopping before heading home. Everything costs more in Alaska so this makes plenty of sense. The Tukwila Costco is strategically located near Sea-Tac Airport and I’d be surprised if at least 10% of its business isn’t Alaskans. 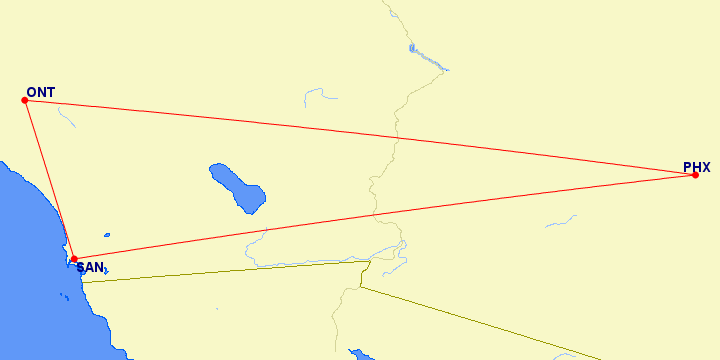 Fortunately, the same benefit extends to those of us in the Lower 48, even at relatively new “mini hubs” like San Diego. Now, I’ll be completely honest: taking advantage of the stopover benefit did cost me money I wouldn’t otherwise have spent. After all, I was really going to Los Angeles and Phoenix, not San Diego. This meant I had to drive 100 miles farther than I wanted, but I did it in a rental car that was less expensive than it would have been in Los Angeles. I also had to overnight in San Diego versus flying out the day I wanted to leave, but the $35 hotel room I bought on Hotwire was cheaper (by far) than buying a flight. There were definite trade-offs, but I think they were worth it for the savings. And spending some time in San Diego, a city I often overlook, gave me the opportunity to reconnect with a friend I usually only see once a year.

The upshot? Look for new routes when you’re looking for award space. These are often wide open with saver level award space, even when most routes have been booked up for months around a busy holiday period. And if you’re flying on an Alaska Airlines Mileage Plan award ticket, don’t overlook the value you can get out of a stopover. This is a huge benefit. It’s one that really differentiates the program from its competitors (most of whom have taken away the ability to do this), and stopovers can really make an award trip more fun!

1 thought on “How I Hacked My Trip To Sunny SoCal”