A startup called Airmule has recently made a big splash by offering $99 flights to Beijing. Obviously there’s a catch. The catch in this case is that you have to give up one of your checked bags (they appear to book you on carriers that allow two checked bags), and your other checked bag is a courier shipment. So, sharing economy, right? Seems like a perfect opportunity for a startup to move fast and break things. Most people don’t check two bags anyway so why not leverage this opportunity to make shipments of up to 50 pounds at low cost, with the fastest delivery possible?

Plus, you really have to love the founders of this company. I mean, as a startup founder myself, I’m rooting for them. One is a hardcore gamer, the other is a former backup dancer for Gucci Mane, and the third loves beer more than you do. I’m not making this up–this is what they say about themselves on their Web page:

These guys totally have you covered.

So, despite the obviously strong qualifications in air cargo handling and logistics possessed by the founding team, the reason why I’d personally pass on this is that there’s a really big catch–one so serious it could potentially make you the star of an episode of “Locked Up Abroad.”

When you pass through Customs–particularly Customs in Beijing–you are personally responsible for everything that you bring into the country with very few exceptions. One of those exceptions is to be the authorized representative of a “common carrier.” These are companies like FedEx, UPS, or DHL, or the airlines themselves. Common carriers are considered by governments to be transportation carriers only. They aren’t held responsible for the contents of the shipments they carry; full responsibility lies with the people sending and receiving the shipment.

If you’re acting as an air courier, you may not have any of those protections. You could be fully liable for what you carry through Customs. So, that suitcase of apparel you’re supposedly carrying for a fashion show? If it’s loaded with heroin, that’s on you, and the penalty for that in China is death (no ifs, ands or buts). The suitcase full of baby formula? If you didn’t know that it’s illegal to bring it into China, it doesn’t matter: the massive fine is all yours if you get caught.

Airmule takes a bunch of reassuring-sounding security measures. For example, they participate in a TSA inspection program which verifies that shipments are safe for air transportation. You do too–by letting the TSA inspect your bag when you check it in (although in all fairness, there are some additional security measures cargo companies comply with, and Airmule says they do this). Airmule claims that they inspect shipments as well, and I think they probably do. However, while this provides reasonable assurance that whatever you’re carrying won’t cause the plane to crash, it doesn’t provide as strong an assurance that what you’re carrying is actually legal to carry into the country where you’re carrying it.

I reached out to Airmule to ask them to clarify who is liable for shipments. Just like the Airmule FAQ, I got an answer that sounded reassuring while skirting the question: 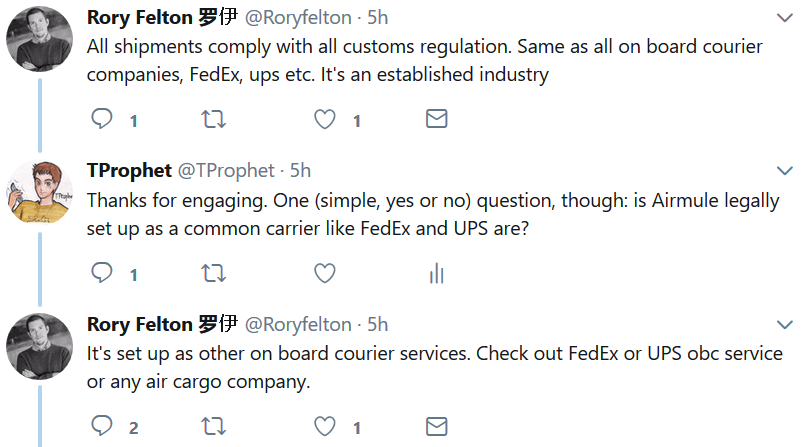 So, I pressed for a clearer answer, and got one that is, to me, as clear as mud. I’ll leave it to you to draw your own conclusions:

I think this is a roundabout way of saying “No”

I lived in Beijing for 3 years, so know that there’s a legitimate demand for this sort of thing. There are a lot of goods that are imported into China through Customs gray areas: they can’t be imported commercially, but they can be imported in personal quantities. One example is certain food items. You’re allowed to hand carry quantities of foodstuffs that are in line with personal consumption or gift-giving, even if importers aren’t allowed to bring in these goods. Similarly, you can bring in bottles of alcoholic beverages that aren’t available in China using your personal Customs allowance. And baby formula is another popular item. You can bring in a limited quantity (the regulation is fuzzy and seems to currently be “as many cans as you can convince Customs is yours”) of foreign-made baby formula for personal use. Every time I left the country, I’d be deluged with orders from new mothers in my office–this is a very popular item given ongoing scandals about tainted milk powder sold in China.

Other stuff is less gray area and more considered to be smuggling. For example, Apple products cost about 40% more in mainland China than they do abroad, so they’re popular items to smuggle in luggage. Even something as innocuous as books could be a really major problem in China. Books and literature are closely controlled in mainland China. That suitcase full of Chinese-language books you’re carrying might actually be hardcore prohibited political speech that could get you in a huge amount of trouble. How good is your Chinese?

And then, there’s the issue of drugs. All you need to do is watch “Border Security” to see all of the inventive ways that drugs can be concealed. If the courier company you’re working with doesn’t figure out that the shipment you’re carrying is actually drugs, but border guards do, your cheap vacation could turn into the last flight of your life. China doesn’t mess around–drugs equal the death penalty and given their history of the Opium War, being a foreigner will get you zero slack. In fact, you’ll get less than a Chinese person would.

Being able to fly for steep discounts as an air courier isn’t a new thing. This is something that has been around for decades. It just hasn’t gotten very popular, because usually you’re going to places where express courier services aren’t able to operate easily (such as Burkina Faso). And there are all kinds of shipments, to all kinds of locations, where hand carrying an item makes the most sense–whether it’s transplant organs, life-saving medicines that require refrigeration, aircraft parts, or other critical shipments that just need to be delivered by the fastest route possible.

I really don’t want to come off as sounding unsupportive of startups, or of this team. I really love innovations that will help people travel and see the world for less. I am the founder of a dating startup myself (one where we’ve had to make some really tough decisions about the trade-offs between usability and security for our users–we have gotten it right so far, but I know it’s only a matter of time before we have a bad day). That being said, there is a massive amount of risk that 20 year old backpackers may be accepting in order to score a cheap holiday, and they probably don’t know that they’re undertaking this risk. As an air courier, you are–in a literal sense–putting your life in the hands of a courier company, and trusting your life and freedom with the integrity of whatever you are carrying for them. Take this seriously, check out the shipment yourself, ask lots of questions, watch a ton of episodes of “Border Security” to find out how inventive smugglers can be, and if you aren’t 100% sure…

…just walk away. A cheap ticket isn’t worth it.

One of the co-founders of Airmule isn’t happy with this article and disputes the facts as I described them. Since the facts about his service came from his own tweets and email I’m not sure where the dispute is, exactly, but I’m happy to correct the record if anything I have written is factually incorrect.

Here’s the email I got from Airmule answering my questions

Notwithstanding the tone of the response–which is arguably justified if the facts are wrong–I have offered Rory and Airmule (and will offer the entire air courier industry) an opportunity to respond to any facts that I got wrong. Thus far, this hasn’t happened. Since calling me “unprofessional” and “lame” doesn’t really help to correct the record should any facts be in dispute, I do hope we can have a facts based conversation going forward.

Airmule ultimately didn’t dispute any of the facts in this blog post. In fact, their Terms of Service explicitly places full Customs liability with the person carrying the suitcase (many thanks to the helpful reader who pointed this out). NOTE: Airmule has stealth-edited their Terms of Service, the original is here.

Rory also claimed that the Terms of Service was out of date. I’ll leave this to the interpretation of the reader:

Would I personally do this? Not on my life! The risk is definitely not worth it.

34 thoughts on “$99 Beijing Flights – With A Dangerous Catch”