Although it is fairly well known that Alaska Airlines Mileage Plan miles are the most valuable airline points in the industry, they are usually considered to be so valuable because of Alaska’s large number of partners. Alaska’s partners include premium airlines such as Cathay Pacific and Emirates as well as niche carriers like Fiji. This allows Alaska Airlines Mileage Plan members access to a very large number of destinations. This year, Alaska further improved the value of Mileage Plan miles for redemption on their own flights by moving to a variable award chart; this allows travelers who plan ahead to redeem for as few as 5,000 bonus miles on many popular routes (such as between Seattle and the Bay Area).

Alaska’s routing rules, however, are simultaneously some of the most restrictive and the most generous in the industry and this is how I just (legally, following all the rules, please don’t hurt me!) hacked my trip to Defcon. Most of the time, I find the rules frustrating. For each direction of travel, you can’t combine partners on an award. You can only combine one partner with an Alaska flight, and the Alaska connecting flight you use needs to have “saver” level availability (which can be very hard to find on some routes, particularly in places like Adak or Barrow). What does this mean in practice? You can’t, for example, fly Alaska from Seattle to JFK, connect to an American Airlines flight to London, and then continue from there to Amsterdam on KLM. A partner award means one partner only (with one exception: you can combine Air France and KLM flights because they are owned by the same company). Making the rules even more frustrating, Virgin America is considered a “partner” for routing purposes so your itinerary can’t include any Virgin America flights if it involves a partner airline. And if all of that wasn’t enough, just to make things more complicated, award tickets involving Korean Airlines or Delta Air Lines (note the Delta partnership ends 5/1/17) must be on a round-trip itinerary. Technically you can book one way, but you still pay the roundtrip price!

However, although the routing rules can make it very difficult to find an award that will work in the first place, Alaska does have one unusually generous rule that makes it at least possible most of the time: stopovers are allowed. And not just one stopover is allowed, but one stopover in each direction. You don’t even need to be traveling on an international itinerary! This legitimately makes up for the considerably more restrictive rules on carrier routing versus other mileage programs by allowing you to wait longer in between flights, so you can create itineraries that connect up. Here’s an example of an award you can book with Alaska Airlines Mileage Plan that you couldn’t book with American AAdvantage:

Stopping overnight is allowed on a US domestic itinerary with Alaska Airlines Mileage Plan.

American, with very few exceptions, will not allow more than a 4 hour layover on a US domestic itinerary. However, Alaska will allow a stopover on a domestic itinerary, so you’re free to book this. It’s not ideal, but it’s also very hard to find saver level award availability between Seattle and Charlotte (and remember that if you’re booking a partner award ticket, you have to find saver level award space the whole way). Alaska’s generous stopover rules make it possible to book awards that would otherwise be impossible.

Alaska allowing stopovers especially makes sense when you consider the far-flung route network they operate, and the accompanying limited service. For example, there are only two flights a week to Adak. Many places off the beaten path receive air service at inconvenient hours as well. Without the ability to stop over, it would be virtually impossible for people living in Adak to book awards to anywhere other than Anchorage. So given the very unique operating environment in the State of Alaska (but not just there, Hawaii and many rural Oregon, Washington, Idaho and Montana communities face the same challenge), Alaska’s stopover rules are a practical necessity for many of their members.

There are, however, some pretty creative ways to use stopovers in order to wring maximum value out of an award ticket. I just squeezed 3 trips out of one ticket. How did I do that? By taking full advantage of the stopover rules Alaska Airlines allows. Generally speaking, Alaska allows you to book a stopover in a hub or connecting city. When you consider the West Coast, this allows opportunities to stop over in every major city. 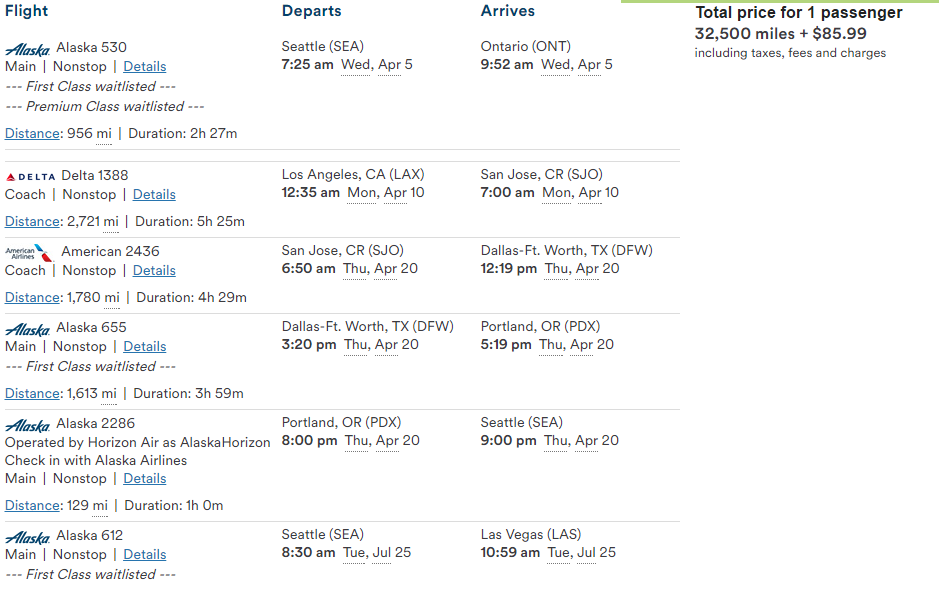 You may recall that I’m actually going to Las Vegas. So why am I flying to Ontario first? On this itinerary, I couldn’t actually use Las Vegas as a stopover point en route to Costa Rica, because there aren’t any onward flights directly from there. However, I was able to use Los Angeles, because there is an onward flight leaving from there. I’m flying to Ontario instead, which is allowed because it is a co-terminal of LAX, and Ontario is closer to Las Vegas. It’s an easy drive or 3,818 Southwest Rapid Rewards points for the flight.

From there, I’m continuing on to San Jose on Delta. It’s possible to use Delta for this segment because Delta is still an Alaska Airlines partner for another 6 weeks, and because I booked a roundtrip ticket so it priced correctly. From San Jose, it’s a pretty conventional return itinerary back to Seattle – I have to double connect through Dallas and Portland because that was the only award availability. You’ll note that I’m returning from San Jose to Dallas on American Airlines – but that’s OK. With Alaska awards, you can only use one partner (plus Alaska flights) per direction, but I’m not using more than one here. Also, while the ticket has to be a round-trip ticket for Delta or Korean segments to price correctly, you don’t actually have to use these airlines in both directions.

“All right, TProphet,” you might say, “you’re back in Seattle. That’s round-trip. How did you get Las Vegas to work?” Well, this is because my ticket isn’t actually a round-trip ticket. It’s an open jaw ticket, meaning that I’m returning to a different destination than my starting point. This is allowed under the rules, and so are two stopovers. The three months I’m spending in Seattle before continuing my journey onward to Las Vegas is my second stopover. And naturally, my Vegas trip in July is to Defcon. 😉

Was this easy to book? Not even close! It’s actually really hard to book stuff like this in practice, which is why more people don’t do it (and probably why Alaska still allows it). Also, considerable flexibility on my part was required. I had to fly into a city that is different than the one I need to end up in, spend 3 days longer in Costa Rica than I was planning, take flights that leave both at midnight and at 6:something in the morning, and it required a phone call to straighten everything out after the Web site choked. Still, I get to fly 8,112 actual butt-in-seat miles for only 32,500 points. The cheapest way to do this with paid tickets would have been $998, meaning that I achieved 2.2 cents per mile in value (net of taxes, which I paid in cash, and miles that would otherwise have been earned). This is 10% above what The Points Guy says Alaska Airlines Mileage Plan points are worth–and more importantly, it’s a practical value. A lot of theoretical points valuations thrown around on the Web are based on prices for premium cabin seats that most people would never pay. This is based on economy class tickets I’d otherwise have bought and paid for.

Do you have Alaska Airlines Mileage Plan miles? Don’t forget that stopovers are an option that can both add flexibility and value to your award redemptions!