On the last two flights I have taken, operated by two different airlines, I have been selected for additional security screening with the dreaded SSSS on my boarding pass: 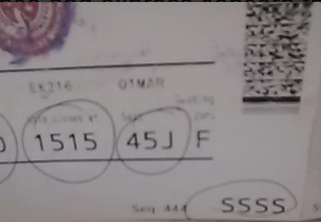 You really don’t want a boarding pass with this designation

What does this mean? Possibly nothing. Sometimes people are randomly selected for additional screening. Lightning could have struck twice. On the other hand, it’s possible that my frequent and unusual travel patterns (at least, unusual for anyone who isn’t a travel blogger) have aroused the suspicion of the TSA. Or maybe it’s the destinations I’m visiting. After all, my last two trips have been to Turkey and Dubai. I did enter my Global Entry number both times, but was still selected for additional screening.

What is involved in additional screening? More time and hassle. You don’t get access to PreCheck or any expedited screening. What’s more, the TSA takes you aside after your regular screening, goes through your bag manually, and takes several test strips to run through a machine. You’re also required to undergo a thorough manual pat-down (the same one that they give you if you refuse to be screened by the machine). Eventually, they will stamp your boarding pass and you’re allowed along your way.

In case you slip through, your airline double-checks for the TSA stamp on your boarding pass to ensure that you have gotten the additional screening. And if you’re traveling *into* the United States, it’s even more hassle. You’re separated from the rest of the passengers at the gate, everything you have is manually searched, you’re manually patted down (and your shoes double-checked), and you’re finally let on the plane. At least you get early boarding as a bonus, though; this is done to ensure you don’t mix with anyone else in the terminal.

The TSA has a redress program. Shortly after 9/11, I was constantly getting flagged with SSSS. I have a very common name, and apparently one of the thousands of people who share my name is on some sort of watch list. I participated in the redress program before, and the problems magically stopped. So, I’m not sure whether this is a recurrence of the previous issue, or something else. I have submitted an inquiry with the TSA, and hopefully the issue will be resolved soon.

Update: I’m definitely “on the list.” I suspect this happened because I traveled to Turkey via a circuitous route–the sort of route that would only be taken by either a shady character or someone trying to use frequent flier miles. It’s not unusual for me to be questioned by border agents about my unusual travel patterns (which are either a result of crazy routes I have to take in order to fly on points, or routes I’m flying because of mistake fares), but it’s definitely the first time I’ve apparently been put on a watch list as a result of this!