Spirit Airlines has some new routes to and from LA, and they’re advertising very low introductory fares starting as low as $34.10 each way (for flights to and from Portland). These are exceptionally low fares, some of the lowest I have ever seen on these routes. Given the savings, should you bite?

The headline fare is low, but there’s a catch!

Maybe not. There aren’t many airlines that are on my “no fly list,” but Spirit and Ryanair both qualify. Why? The customer experience is more like navigating a minefield rather than buying tickets. Apart from charging for checked bags, they also charge for carry-on bags, printing your boarding pass, and even booking online. But wait, there’s more. Once you’re finally on board (and after paying more in add-on fees than you expected), Spirit has the most uncomfortable seats in the skies. There is a mere 28″ of space in between the narrow 17″ seats. Seats on Spirit don’t even recline! And unlike every other airline, not even a glass of water is free. You’ll have to buy a drink and pay $3. So, by the time you get done, you might not be saving a lot of money.

There is also the question of irregular operations. If you’re flying with a mainstream airline (in the US, this means most carriers apart from Southwest, Spirit, Allegiant and Frontier), these airlines have agreements to get you where you’re going even if another seat isn’t available on the carrier you booked. So, for example, if you’re on the last United flight of the day from Seattle to Las Vegas and the plane has a mechanical issue, they could instead (pending availability) rebook you on a later Alaska or Delta flight to get you where you’re going. Spirit will never rebook you on any flight that isn’t their own. They have a reputation for taking liberties with the definition of “weather” in order to avoid paying for hotels if they strand you somewhere (if they can blame weather, they don’t have to pay). And Spirit has far more limited numbers of flights, so it could be several days before they can get you where you’re going. This isn’t a problem with a larger carrier. Even Southwest, which also won’t rebook you on other airlines, at least has such a large and extensive route network that there’s usually a way to get you where you’re going in a reasonable time frame. 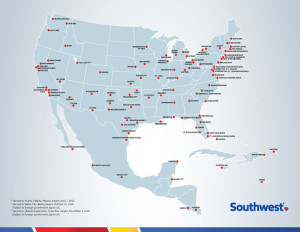 Is Spirit worth it? I would maybe consider them for one-way, optional journeys from my home city where I don’t need to carry luggage and I can buy the ticket at the airport and check in online. This avoids Spirit’s extra “gotcha” fees. And if something goes wrong, I could just cancel the trip and ask for a refund (which Spirit will grudgingly provide in the event of irregular operations). If I’m only using them from my originating city, I won’t have to worry about getting stranded in a place where hotel room costs erase any savings. However, also note I’m 5’7″ tall and weigh 140 pounds. Narrow seats that are spaced close together don’t bother me that much. If I end up in Seat 31B, so be it. If you’re big and/or tall, it’s another question entirely. You’ll likely end up paying for priority seating to avoid the crunch in the back, erasing even more of the savings.