For a long time, most US airlines charged 25,000 miles for a saver level domestic round-trip award in economy class. This is a number that stayed the same for literally decades. Airlines cut availability of saver level awards, introduced additional higher level pricing tiers with more availability, and made one-way awards available, but one principle remained the same: with few exceptions, the price was–more or less–12,500 miles whether you were flying from Seattle to Portland, Oregon or Portland, Maine.

Some “hacks” were available, but they were limited. For example, British Airways Avios offered (and still offers) a distance-based chart that charges per flight. For short-haul flights of 650 miles or less, they charged just 4,500 miles (this award tier has been eliminated in North America, and now all flights up to 1,150 miles cost 7,500 miles). This is still great value, but it only applies on non-stop flights. Flights with a connection will cost you at least twice as much. 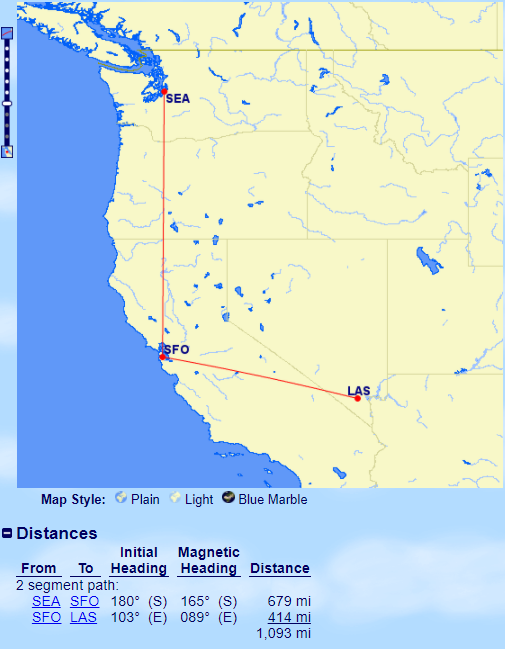 A nonstop flight from Seattle to Las Vegas costs 7,500 Avios. However, connecting in San Francisco will set you back 15,000 points!

Well, a lot has changed in 2017. Delta got rid of its award chart entirely, and there are now some great values on it if you know where to look (along with some terrible values too). Alaska massively revamped its award program, but was much more transparent with the changes than Delta. American got into the game by introducing a new short-haul award, and even United has an anemic offering in its award program.

A couple of years ago, I ended up with a massive haul of Delta points through a promo they ran with American Express. The only problem was using them. The Delta SkyMiles program has been much maligned over the years, and deservedly so. Delta was historically stingy with award availability, making it hard to use SkyMiles. Then they introduced an insanely complicated award chart with as many as five different pricing levels. Awards went from being almost impossible to obtain to available, but incredibly expensive.

Eventually, Delta got rid of its award chart entirely. Most people assumed that it would result in a price increase for most flights, and for awhile, that was true. While prices have gone up for many flights, they have–surprisingly–come down on a lot of flights too. There doesn’t seem to be a whole lot of rhyme or reason to it, but short-haul flights can be priced from 5,000 to 7,500 miles when booked in advance.

What’s more, the pricing may be loosely based on the revenue fare, but also seems to be based on demand for the flight. Seattle to Anchorage is a $140 paid flight, so redeeming SkyMiles yields a value of about 1.8 cents per mile. 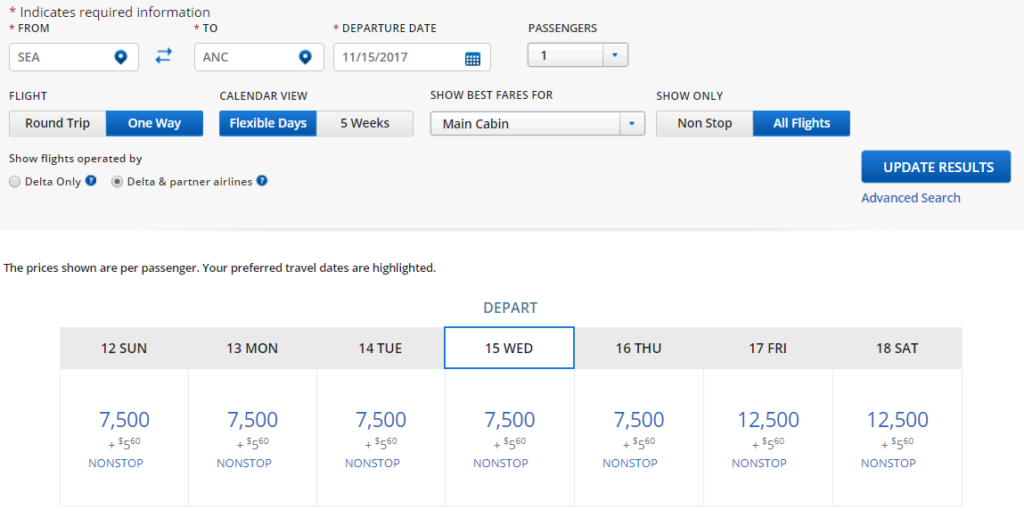 American’s AAdvantage award chart is largely theoretical because there is so little award availability anymore. That being said, short-haul flights of 500 miles or less to the US or Canada are allowed for 7,500 miles.

If you’re stuck with a lot of AAdvantage miles and want to use them for short-haul flights within North America, focus on Canada. 500 miles can get you from most of the East Coast to Toronto or Montreal. These would often be very expensive flights otherwise. Given that American allows you to take a connection en route to your destination (while BA charges you per flight), this might be a better option if you can hold the overall distance traveled to under 500 miles.

United has, for many years, offered a short-haul award of 10,000 Mileage Plus points for up to 700 miles traveled. However, this just isn’t much of a savings over the 12,500 mile level for longer flights. Since the difference in cost is so small, the calculations really don’t change substantially versus a 12,500 mile saver level award. Generally speaking, United short-haul awards are poor value.

Alaska Airlines revamped their award program at the beginning of this year. There was a lot of breathless coverage at the time along with a lot of silly hacks people published taking advantage of loopholes in the pricing engine (which have since been closed). While some of the changes were negative (the biggest being the loss of Delta as a redemption partner) others were largely positive, such as the move to a distance-based redemption chart. This exposed some sweet spots that have largely escaped the attention of mainstream travel blogs, but they didn’t escape my attention.

As good as short-haul awards are on Alaska, I haven’t personally been using them. First of all, they’re hard to come by because Alaska’s chart is variable. Although in theory, you can find awards at the lowest level published, in practice they’re hard to get: 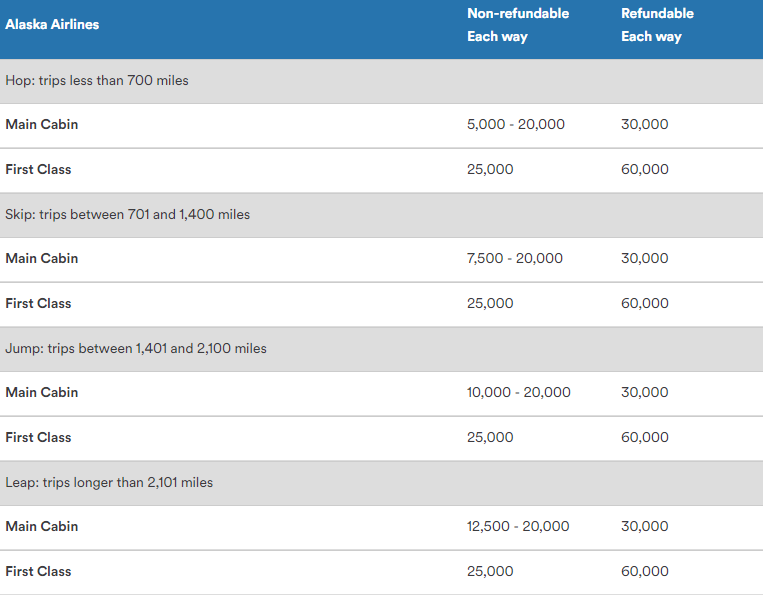 Although you can find Alaska awards at the lowest levels, it’s not consistent.

For example, it’s under 700 miles from Seattle to Ketchikan. Good luck finding an award at the 5,000 mile level though. I did find a couple – on December 23, for example. Merry Christmas! These awards do exist, but a more common redemption level is 20k which is more in line with what flights to Ketchikan cost.

Unlike most programs, Alaska allows a stopover on a one-way award. This is such a valuable benefit that I always try to maximize it when using their program. However, adding in a stopover seems to consistently drive the price up to 12,500 miles (and this is guaranteed to happen when a partner is thrown into the mix). Accordingly, given my usage pattern and the flying I like to do, it really only makes sense to redeem Alaska miles for long-haul domestic awards in economy class or long-haul international awards in business class (with some exceptions; partner awards on American are also particularly good value off-peak).

The Southwest chart isn’t distance based, but it’s worth pointing out that it can be highly competitive with distance-based airline award charts. Southwest awards are based on the price of the flight, not the distance traveled. However, for some flights, this creates a sweet spot. For example, flights from Seattle to Tucson are over 1,200 miles which would push an award into the mid-haul Avios chart (at 10,000 points required). However, Southwest regularly offers sale fares between the two markets and you can sometimes redeem Rapid Rewards points for much less. The same is true with flights to Phoenix and Los Angeles. These are very competitive markets and the fares are low, sometimes as low as $59 each way. With Rapid Rewards holding a pretty steady value of 1.7 cents per point (sometimes more, sometimes a bit less) it’s always worth comparing Southwest to an economy class short-haul distance based award. You may find that Southwest offers better value.

One “sweet spot” I have found is also a risky one: combining multiple short-haul award flights. I’ll explain how I did this with my friend Boris on an itinerary to Mazatlan this December.

I am always on the lookout for new routes (since this often means award availability) and American Airlines (a British Airways partner) has recently increased their flying to Mexico via their regional partner Compass Airlines (which, oddly enough, has its roots in Delta-acquired Northwest Airlines). It’s 1,046 miles from Los Angeles to Mazatlan which puts the LAX-MZT flight in the 7,500 mile band with British Airways Avios. American’s flight from Mazatlan to Phoenix is also in the 7,500 mile Avios band, at 789 miles. So both flights are right in the “sweet spot” with the Avios program.

What’s more, these are expensive flights to a popular beach resort at a busy time of year. It’d cost over $500 to buy the tickets! Granted, there is quite a bit of tax built into the fare (which you have to pay in cash when booking with miles) but you can realize about 2.3 cents per mile in value when booking these flights in economy class.

Availability is always tough with American but Boris and I found two seats outbound from LA on December 8th. On the 16th, there wasn’t availability for two from Mazatlan to LA, but there was for one person, and there was another ticket available from Mazatlan to Phoenix (for one person) leaving an hour later. Boris was returning to Los Angeles, but I can connect back to Seattle just as easily through Phoenix so we agreed to split up on the return. So, here are what my flights look like, for just 15,000 Avios: 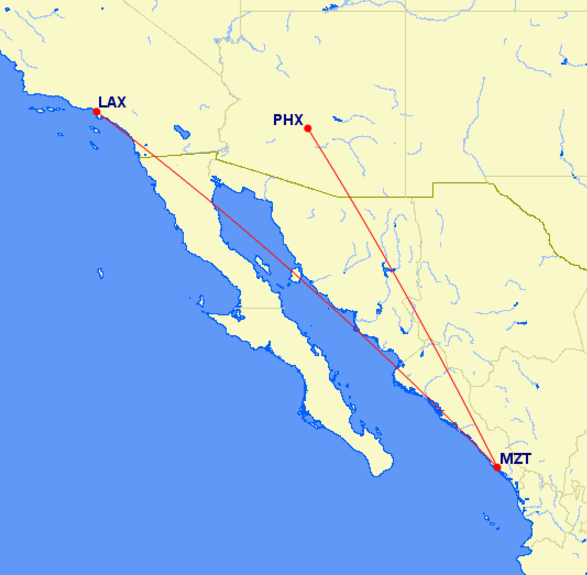 Of course, I’m not starting my trip in LA, and I’m not ending it in Phoenix. I needed to book connecting flights. Unfortunately, there weren’t any available on the day of travel that would get me to Los Angeles in time, so I ended up flying a day earlier. For me, though, that’s actually fine. I have a lot of friends in LA, so I was happy to schedule an extra day there.

How did I do it? Delta. There was a 5,000 mile nonstop award between Seattle and LAX. This flight would have cost $106, so I got a very solid 2 cents per point.

For the return, I initially booked a Southwest award at a very solid 1.8 cents per point in value based on a $130 fare. However, this ultimately wasn’t great value, because Alaska Airlines put a flight on sale leaving at almost exactly the same time. I had a $75 e-certificate that was due to expire, and using this brought the fare down to under $25 in cash. Considering that I’ll earn 1107 miles on this fare, and I can regularly get 2.2 cents per mile in value from Alaska miles, the ticket is actually free–it’s actually a better deal than using points. 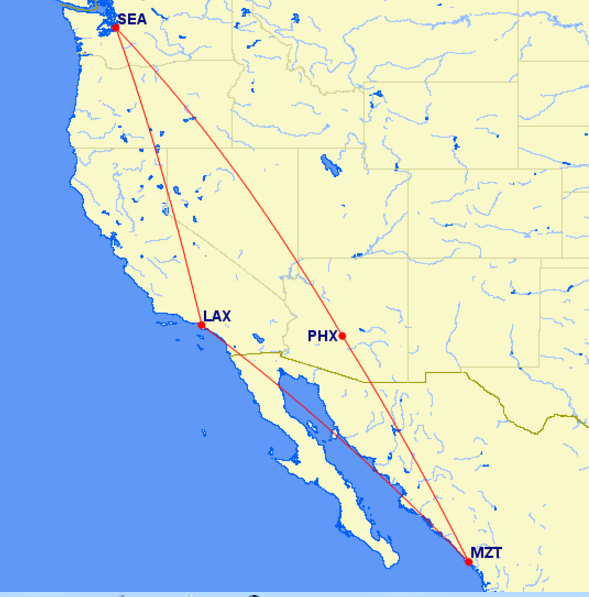 What’s the risk with a “hack” like this? The biggest one is on the return. If anything goes wrong with my flight out of Mazatlan, I could technically be stranded in Phoenix. This is because I’m traveling on two separate tickets. American only owes me a flight to Phoenix, and Alaska only owes me a flight from Phoenix to Seattle at the scheduled time. If I don’t show up for it, they don’t owe me a flight home. Additionally, American isn’t technically required to check my bags through all the way from Mazatlan to Seattle, even though I’m flying with their partner Alaska.

However, in practice, it’s sometimes possible to arrange bags to be checked through. And in practice, Alaska will usually put you on the next flight out if you misconnect, even if it’s not their fault. I’m leaving on the last flight of the day, but my family has a place in Phoenix, so I wouldn’t be sleeping on the airport floor overnight. I have a couple of friends in Phoenix, so can probably lean on someone for a ride. Ultimately, the best deals sometimes require taking a bit of risk, and my worst case scenario is burning some points to get out of Phoenix.

By optimizing my redemption of short-haul awards in economy class, I was able to achieve some very solid points valuations, all over 2 cents per mile, with hard-to-use points. And I got tickets to Mexico roundtrip from Seattle for just 20,000 points.