I’m writing to you from Seattle, where I’m celebrating the holidays with my family. I won’t be taking any more flights in 2014. Here is ultimately where I traveled in 2014: 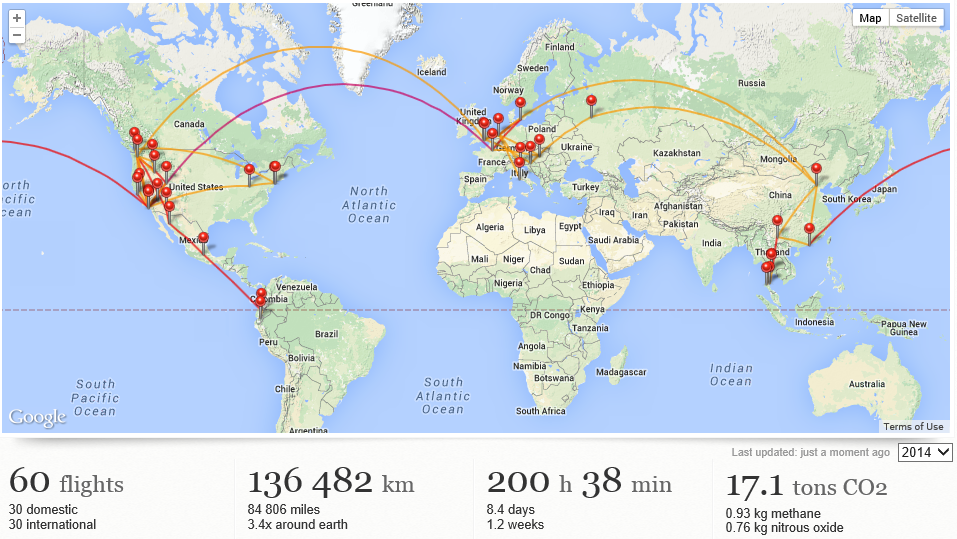 So, in the spirit of New Years’ retrospectives, here are my top memories of 2014.

Most amazing bargain: Definitely the Alitalia round-the-world fare widely assumed to be a mistake fare. I traveled all the way around the world for (effectively) under $219.

Most unexpected development: I ended up with Delta Gold Medallion status because I booked so many bargain fares with them. Normally riff-raff like me are filtered out, but because I lived outside of the US during the period in which Medallion Qualifying Dollars are calculated, I was exempt from the usual spending requirement. So, while flying around on sale fares, I got to enjoy some fancy airport lounges that are most definitely not a normal part of the Seat 31B experience.

Most surprising destination: Ecuador. An amazing, beautiful, friendly and ridiculously under-visited country in South America. I was able to visit on an incredible Aeromexico introductory fare of under $400.

Scariest travel moment: Getting really sick in Yunnan, China, near the Tibetan border. The only hospital within 100 miles that supposedly treated foreigners had no English-speaking doctors. I ended up booking the next flight out to Bangkok, the nearest city with international-standard hospitals, and heading to Bumrungrad Hospital. Fortunately, after an extensive series of tests, the doctors informed me that I had a bad case of heartburn. The total hospital bill? Under $300, fully paid by my travel insurance.

Most interesting city: It’s a toss-up between Beijing, my always exciting and vibrant home of 3 years, and Mexico City. However, Mexico City wins. I was amazed how surprisingly modern it is, how fashionably people dress, and how much there is to do. Honestly, if you didn’t know better, you’d think you were in Paris or Madrid.

Most stressful travel experience: Traveling through Italy and The Netherlands with my parents, who consider a trip to Vancouver, Canada (3 hours’ drive from their house) to be an exotic foreign vacation. Why was it stressful? Not because of them–they were surprisingly adaptable and really good sports–but because I cared so much about ensuring they had a memorable experience. It was a surprisingly smooth trip overall, my careful advance planning paying off, and it helped that my parents had really done their homework. These countries turned out to be almost perfect for first-time visitors to Europe.

Most unusual airline flown: It’s a toss-up between NOK Air in Thailand (a low cost carrier who paints their planes like cartoon birds) and Aeroflot Russian Airlines. No issues in either case, both got me safely to my destination!

City visited for the shortest time: A tie between Hong Kong and Vancouver. I visited Hong Kong twice for 5 hours when flying Cathay Pacific between Beijing and Hong Kong. This is enough time to go into the city and have a very nice Cantonese dinner. I visited Vancouver on a layover between Los Angeles and New York (I flew via Vancouver to use the Cathay Pacific flight from there to New York).

Most scenic drive: Zagreb to Dubrovnik via Neum, Bosnia. If you love great drives, the Adriatic coast will not disappont.

Most luxurious travel experience: Business class, British Airways, Seattle to London. Normally I wouldn’t book this, but I didn’t have any flexibility on dates, times, or the type of points I was redeeming. And I was traveling to my graduation (I completed an MBA in 2014), so I didn’t mind splurging a little.

Least luxurious travel experience: Careening down an Ecuadorian highway locally known as “Carretera de Muerte” (Highway of Death) in a van full of singing Germans with dodgy brakes and no working seatbelts. I didn’t really fear for my life–the driver knew the road–but I was really glad when the 3 hours of bone-jarring gravel and potholes were over.

Most friendly people: Thailand, without question. The warm hospitality of this country is almost unmatched in the world.

Most unusual lodging: A 19th century mansion amid some of Denmark’s most beautiful gardens, converted to student housing. I slept on a couch in the public area, rented to me on airbnb by the friendly and enterprising student occupants.

Most inexpensive lodging: Backpacker Hostel, Koh Samui. It was around $8 per night, an incredible bargain for a bunk in an air conditioned room.

Most expensive lodging: $78 per night in London at the DoubleTree Heathrow. There just wasn’t anything cheaper since most hotels were full.

Worst airline: Transavia. Surly staff and the inflight entertainment was a bizarre video of the flight kitchen in which sandwiches are made. Definitely unappetizing!