One of the best kept secrets for flying between Europe and Asia is the Russian flag carrier Aeroflot. It’s not only the average least expensive carrier, it’s also one of the most convenient, depending upon the airport from which you’re departing. How much less expensive and how much more convenient? On a recent flight I took from Zagreb to Beijing, Aeroflot was by far the fastest way to get there and, at around $500, the flight was $150 less than the next cheapest flight (via Qatar). There are sometimes other cheap flights–for example on the Polish flag carrier LOT–but Aeroflot has been the most consistent bargain in my experience.

Yeah, you might say, but it’s Aeroflot. The formerly crash-prone, formerly Soviet airline whose logo still bears a hammer and sickle. And if you’re going on Aeroflot, you have to fly through Russia, a country which requires a visa for nationals of most countries. And by the way, Russia just invaded Ukraine! All of these are valid points, some of which are entirely rational and some of which no longer apply.

If you’re flying through Russia, you don’t need a visa if you will not leave the sterile area of the connecting airport (in the case of Aeroflot, Sheremetyevo Airport). When you land, don’t go the passport control area; follow the signs to the transfer desk. The Russian authorities will run an INTERPOL check on your passport and then direct you through to Russian airport security. My US passport was no problem despite recent US sanctions against Russia. Also, even though Russia just annexed part of Ukraine, security at the transfer area of the airport was pretty lax. The Russians seem to trust the competence of security in EU airports.

Sheremetyevo is not Schiphol, and although it’s a more comfortable airport than Domodedovo (the other Moscow airport), it’s not the most comfortable for layovers. Two transit hotels are available, but they are absurdly expensive as is everything else at the airport. Depending upon what you buy, you’ll pay 3-7 times as much as you would elsewhere. My layover was 4.5 hours and I ended up spending about $50 at the airport in between food and the pharmacy (it would have been about $20 otherwise). Free WiFi is available in many parts of the airport but not everywhere. Look for the Sheremetyevo Free WiFi and Beeline Free WiFi IDs.

Sheremetyevo Airport is basic and functional.

So, how about the safety and the service? I flew on newer, modern Airbus and Boeing aircraft. These are maintained well according to international standards. Aeroflot is a member of the SkyTeam alliance. I accrued my mileage to SkyTeam partner Delta, and it posted to my SkyMiles account exactly as advertised within a week. This didn’t happen correctly on my last flight with Aeroflot (when I was stranded in Moscow overnight and rerouted on KLM for the final segment) and I had to fight to get my points, so I was careful to keep my boarding passes until I saw the miles post. In-flight announcements were made in English, Russian and Chinese. Interestingly enough, the Chinese-language announcements (made by a native Russian speaking crew member) were almost flawless, but the English-language announcements were difficult to understand. 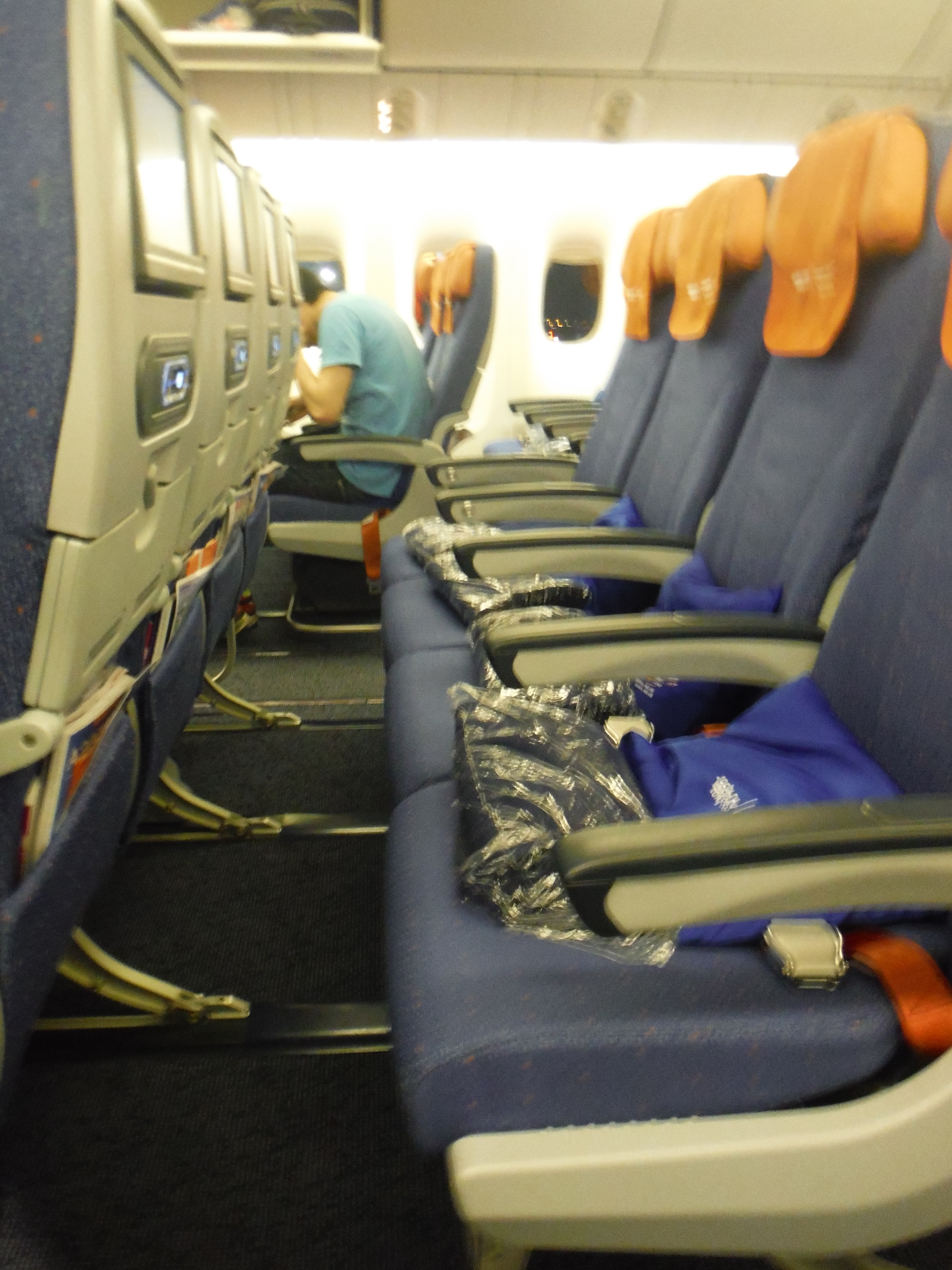 Aeroflot has improved the beverage service since the last time I flew them, but the food wasn’t as good this time. In economy class on the short-haul flight (Zagreb to Moscow), we were served a platter of cold snacks. An almost identical platter of cold snacks was served for breakfast before landing in Beijing. The hot meal was served about an hour after takeoff from Moscow, and there was a choice of chicken or fish. I am allergic to some fish, so I chose the chicken option and wasn’t very impressed. Aeroflot was trying to do an Asian-style chicken but they should stick to Russian food, which they do much better. The fish entree looked much better. 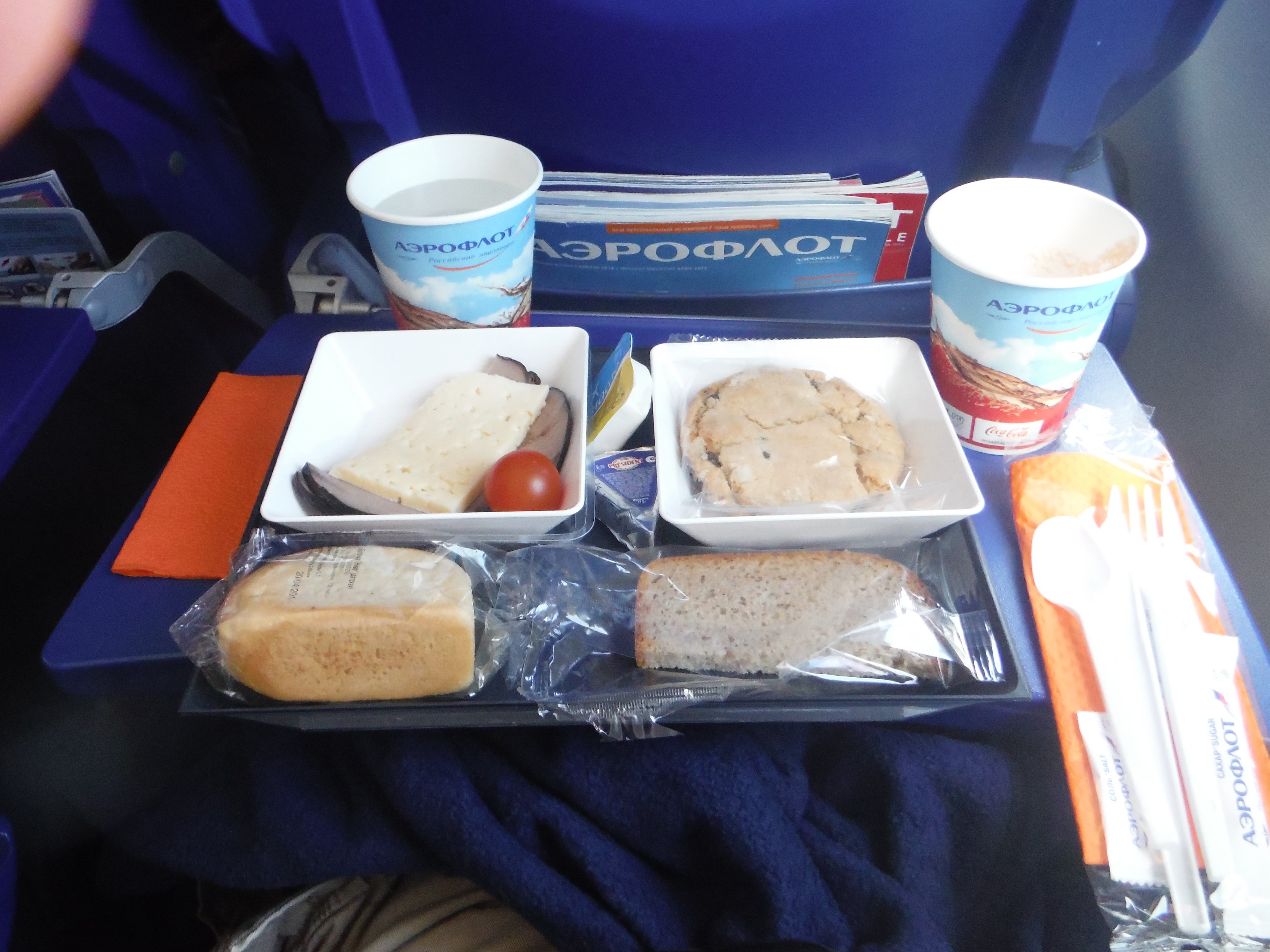 Beverage service used to be very odd; no alcohol served at all, and beverages were served only before the meal (none during or after). So, you’d drink your whole beverage and then be thirsty after eating. The beverage service has changed so that now red and white wine are offered with dinner (and only during dinner). Shortly after dinner was served, the crew came through the cabin offering hot beverages and water.

The in-flight entertainment on Aeroflot is some of the best that you will find anywhere. From the new 3-D maps to Russian propaganda (thinly veiled as news and documentaries) to the latest Hollywood movies, you’ll find something to enjoy. The system is fast and responsive and I was very pleased with nearly every aspect except the control box under my seat! If you choose an aisle seat, do so at either end of the middle row, not the aisle seat nearest the window.

Overall, I believe that Aeroflot still represents exceptional value and–as of today–there is little impact from US sanctions on Russia. Transit is still allowed through Moscow airports for US passport holders without any visa and with minimal hassle. The biggest problem so far is that Aeroflot currently cannot accept US-issued credit cards because the bank they use has been cut off from US banks. If you want to book with Aeroflot you’ll need to do so through an online travel agency (I use Orbitz, which typically shows the same fares and books into the same fare classes as booking with Aeroflot directly).

Should you fly Aeroflot? I consider it a little risky to book right now, because of the political headaches that could occur. However, if you’re traveling soon, the risk is probably low–sanctions generally don’t happen overnight and without a lot of prior warning. The inflight service is good, flight safety meets international standards, and the planes are comfortable. For the price, Aeroflot value is awfully hard to beat!

2 thoughts on “Flying Aeroflot Amid A Ukranian Invasion”